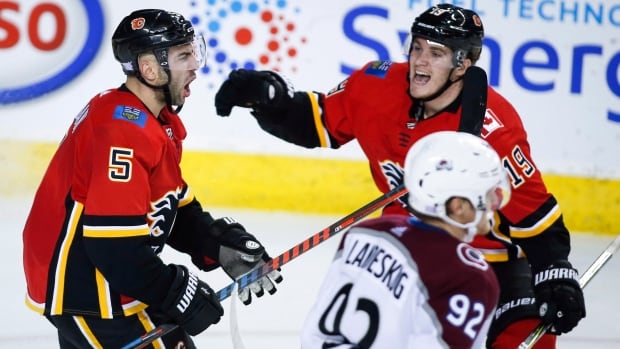 Mark Giordano had a goal and two assists as the Calgary Flames scored five times in the third period for a thrilling 6-5 comeback victory over the Colorado Avalanche on Thursday.

Tied 4-4, Giordano scored the go-ahead goal at 13:47 when he jumped up into the rush, took a pass from Mikael Backlund, and snapped a shot over the blocker of Semyon Varlamov.

Backlund, Elias Lindholm, Sean Monahan, James Neal and Michael Frolik also scored for the Flames (8-5-1), who have won three straight. Matthew Tkachuk added three assists. It’s already the fourth time this season the Flames have come back to win a game in which they trailed after two periods.

Landeskog’s goal first appeared to be Wilson’s second of the game before the Colorado captain was credited with his 11th of the season. Wilson picked up an assist on the goal.

Down 4-1 after two periods, Calgary began its comeback 47 seconds into the third on Lindholm’s power-play goal, his team-leading ninth goal of the season.

The man advantage was the result of a charging major on Ian Cole late in the second period after his heavy hit crumpled Mark Jankowski as he was looking back for a pass. Shaken up, Jankowski went to the dressing room. He returned to sit on the bench in the third period, but he did not play.

The Flames drew within one at 5:21 when Monahan deflected Noah Hanifin’s point shot.

The Saddledome crowd then erupted at 10:52 when Neal got the puck in the slot and ripped a shot past Varlamov for his third goal and a tie game.

Just over a minute after Giordano’s go-ahead goal, Frolik made it a two-goal lead, one-timing a Tkachuk feed for his sixth goal.

It would end up the eventual game-winner because the Avs got a power-play goal from Landeskog at 18:57 to set up a harrowing finish.

Calgary was controlling the game, outshooting the Avs 17-4 when a stray pass from Giordano resulted in Kamenev breaking up the ice on a short-handed 2-on-1 and scoring his first career goal.

Less than two minutes later, Dries got his first NHL goal, when his rebound banked off the skate of Rasmus Andersson in the slot and went into the net.

Mike Smith earned the victory, despite giving up five goals on 26 shots. He improved to 5-4-1.

Varlamov, who entered the game with a 1.62 goals-against average and a .950 save percentage, had 31 saves.

The five goals he surrendered in the third period came on just 11 shots.