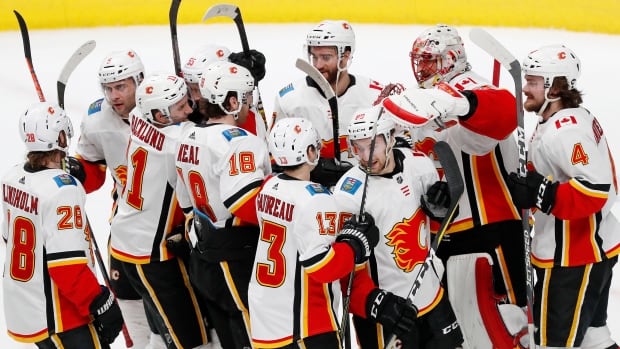 The Calgary Flames scored three times in less than two minutes late in the first period on their way to clinching the top spots in the Western Conference and the Pacific Division with a 5-3 victory over the San Jose Sharks on Sunday night.

Sean Monahan, Mark Jankowski, Dalton Prout, Mikael Backlund and Michael Frolik all scored for Calgary, which won for the eighth time in 11 games. The Flames will have home-field advantage throughout the Western Conference playoffs.

It’s the first time in 13 years that the Flames have won their division.

Timo Meier and Logan Couture each had a goal and an assist and Kevin Labanc also scored for the Sharks, who lost for the eighth time in nine games after winning six straight.

The Flames held San Jose to a season-low 15 shots. The Sharks’ previous low was 20 against Boston on Feb. 26. San Jose managed just nine shots through the first two periods, and just three in the second.

Janikowski scored his 34th goal just 31 seconds later, and Prout scored his first of the season at with 3:47 left in the period to put the Flames up 3-1.

Backlund scored in the second period, and Frolik in the third to cap the scoring for Calgary.