Yet there are still questions about how far those goalies can carry their team in the Stanley Cup playoffs.

Smith and Rittich sounds more like a law firm than the goaltending tandem anyone expected the NHL’s second-best team to have. Smith is a 37-year-old veteran with a sub.-900 save percentage seven years removed from his last playoff action, while Rittich is a 26-year-old in his first full year in the league who would be getting his first taste of the Stanley Cup playoffs.

It’s not out of the realm of possibility the Flames split the duties like they did all season, and as a result they’re one of several teams with goaltending questions as the playoffs begin. Winnipeg, San Jose and Toronto are among the other serious contenders with significant question marks in net at the wrong time of year.

“We wouldn’t be where we are without our goaltending,” Calgary general manager Brad Treliving said. “We’ve gotten strong goaltending all year at the right time. What we’ve never really had is times in the year where both guys are maybe going through a little bit of a skid.”

Treliving wouldn’t be surprised if head coach Bill Peters uses both goalies in the playoffs, a “non-traditional” strategy but not one he thinks is a problem. Smith figures to start Game 1 of the first round against Colorado on Thursday, but it’s up in the air after that.

The Flames at least know they can turn to another goalie if one falters. San Jose, which had the worst team save percentage in the NHL at .889 will go with Martin Jones, but backup Aaron Dell has struggled plenty this season, too. The Sharks also open against the defending West champion Vegas Golden Knights, who have arguably the best goaltending situation in the playoffs assuming Marc-Andre Fleury is healthy. 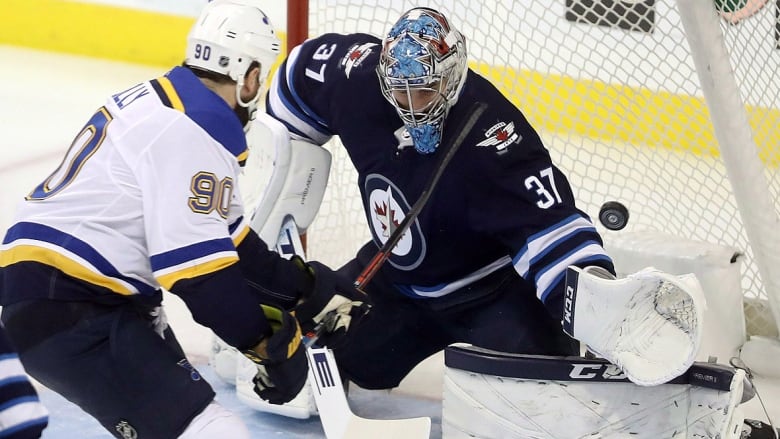 The Jets will ride goalie Connor Hellebuyck, pictured here, even though he hasn`t had his best NHL season. Also, backup Laurent Brossoit should be back for the series opener against St. Louis. (Trevor Hagan/Canadian Press/File)

Winnipeg will ride with Connor Hellebuyck, even though Laurent Brossoit should be back from injury to back up in Game 1 Wednesday against St. Louis, which has out-of-nowhere phenom Jordan Binnington.

Hellebuyck has not been quite as stellar this year as last when he carried a strong regular season into the West final, though that run could pay dividends this time around.

“One thing that you can’t substitute is experience,” Jets GM Kevin Cheveldayoff said. “Once you go through something and you experience it, you have a mental template of how you need to act and what you liked about it, what you didn’t like about it. So now he’s got that experience. He likes to play big games.”

With big games to come against the Boston Bruins, Toronto’s Frederik Andersen better be up to the task for the Maple Leafs to avoid a third consecutive first-round exit. Andersen is 3-3-3 with a 3.94 goals-against average and .881 save percentage in his last 10 games and wondered if injuries have thrown off his rhythm.

“I think I’ve played more games and felt better” in previous seasons, Andersen said. “This year I’ve been banged up a little bit at times and obviously with the time I missed, it’s been different.” 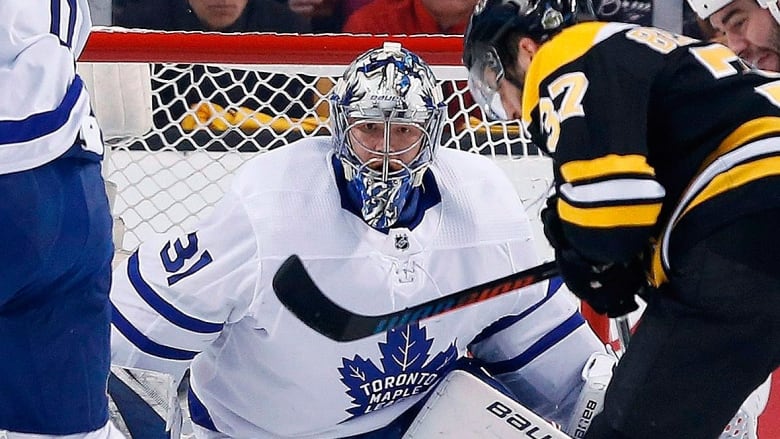 Frederik Andersen, the Leafs’ undisputed No. 1 goalie entering the playoffs, has posted a 3.94 goals-against average and .881 save percentage in his last 10 games. (Michael Dwyer/Associated Press/File)

After head coach Mike Babcock said nothing is more important going into playoffs than a goaltender feeling good about himself, Andersen’s response might not portend great things for Toronto. Add to that switching out regular backup Garret Sparks for Michael Hutchinson at the eleventh hour and there’s Philadelphia Flyers-level goalie drama going on with the Maple Leafs.

There’s no drama with the Flames, who finished second in the league in goals behind Presidents’ Trophy-winning Tampa Bay and are confident going into the playoffs. While Columbus acquired Keith Kinkaid from New Jersey for depth behind Sergei Bobrovsky and Joonas Korpisalo, Calgary didn’t come close to such a move and will roll along with Smith and Rittich.

“That was not a discussion point for us,” Treliving said. “They have a great relationship, they push each other, they cheer for each other when they’re not in the net. I don’t pay a whole lot of attention to things outside of our room. We just worry about ourselves inside that room, and I know our guys have a lot of confidence in both guys.”