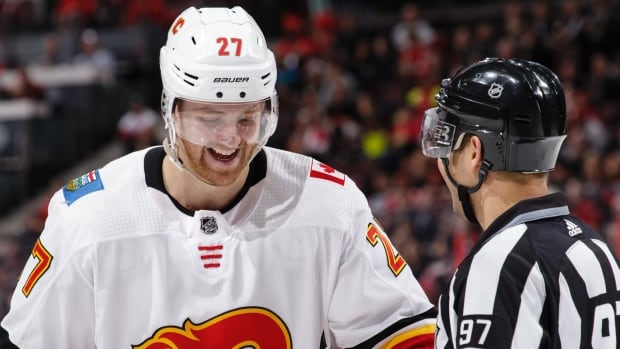 The Calgary Flames made a splash at the NHL draft Saturday, dealing star defenceman Dougie Hamilton to the Carolina Hurricanes in a five-player trade.

Along with Hamilton, the Flames shipped forward Micheal Ferland and blue line prospect Adam Fox to the Hurricanes in exchange for forward Elias Lindholm and defenceman Noah Hanifin.

“Elias and Noah, they’re going to fit right in,” Calgary general manager Brad Treliving said. “They’re good teammates. Part of when we look at this is making sure we have a good chemistry and a good mix in our dressing room.

“Both guys were real excited.”

There had been plenty of trade rumours swirling ahead of Friday’s first round, but nothing materialized on the draft floor.

Saturday also started off slow with teams trading up or down the draft board until the Flames and Hurricanes agreed on the blockbuster deal that was announced during the sixth round at the American Airlines Centre.

Hamilton, 25, had 17 goals and 27 assists in 82 games with Calgary last season. The Toronto native, who was originally drafted ninth overall by the Boston Bruins in 2011, has 64 goals and 156 assists in 423 career games.

Calgary acquired the six-foot-six Hamilton from Boston ahead of the 2015 draft, making the Hurricanes his third team in the last five seasons.

“My first time having to move and switch teams and stuff I think it’s definitely a learning experience, something that helps you grow as well,” Hamilton said on a conference call after being traded for the second time in his career.

“But now as a 25-year-old, it’s obviously tough any time you get traded and have to move, but I think it’ll be easier this time around and I’m really looking forward to being in Carolina.”

Hamilton said he found out about the trade while watching draft coverage on TV.

“It’s a weird feeling, especially in the summer,” he said. “It’s still a couple months before you start playing. Nothing really changes today or tomorrow or anything like that but definitely will be a change in September when I’m flying to a different city. But I’m excited and I’m looking forward to it.”

“Micheal’s a warrior,” Treliving said. “He’s got one year left on his contract and then he’ll be an unrestricted free agent. That always comes into consideration.”

Lindholm, 23, and Hanifin, 21, are both pending restricted free agents and played for new Flames head coach Bill Peters in Carolina.

“Bill spoke really highly of both players and really likes both players,” said Treliving, who added he’s already had initial talks with the players’ representatives. “Both guys have great character. He liked both players. It was a great resource to have.”

“This trade probably started three weeks ago or so with Brad,” Carolina GM Don Waddell said. “We started talking about different players and different concepts and we had a lot of conversations.”

“Noah’s just scratching the surface,” Treliving said when asked how the Flames will replace Hamilton’s offensive production. “We’ve got some guys on the blue line that can produce.

“We also want guys that want to be in Calgary.”

That was likely a veiled reference to Fox, the 66th pick in 2016 from Jericho, N.Y. The 20-year-old has spent the past two seasons at Harvard University, and will return for a third in 2018-19.

“Adam Fox is a terrific prospect,” Treliving said. “The reality was there’s a question of whether we could sign him.”

Calgary didn’t have a selection until the fourth round the 2018 draft after trading for defenceman Travis Hamonic and goalie Mike Smith at this time last year.

The move is the latest shake-up for Carolina since Tom Dundon bought the team from Peter Karmanos Jr. earlier this year. The Hurricanes removed Ron Francis as GM, replaced him with Waddell and promoted assistant Rod Brind’Amour to head coach.

The Hurricanes own the NHL’s longest playoff drought, which stands at nine seasons.

Waddell said Friday night that he’d heard a lot of trade chatter at the draft with almost nothing to show for it. Even after making this move, he’d still like to shore up Carolina’s goaltending situation either via trade or free agency and could also trade defenceman Justin Faulk, whose no-trade clause kicks in July 1.