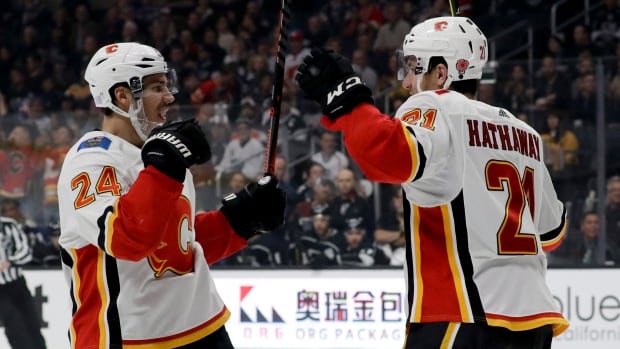 David Rittich stopped 21 shots for his first career shutout and Travis Hamonic scored to help the Calgary Flames to a 1-0 win over the Los Angeles Kings on Saturday night.

The Flames have won five of their past six games.

Jack Campbell made 35 saves for the Kings, who have been held to one goal or fewer in six of their first 16 games.

The Flames went in front 2:26 into the first period. Hamonic got his second goal, with Mikael Granlund setting a screen that kept Campbell from seeing the shot to the far post. Austin Czarnik and Noah Hanifin had assists, with Hanifin picking up his third in the past four games.

Hamonic also played his part to help smother the Kings’ struggling offense. Hamonic used his body to break up a pass by Ilya Kovalchuk during an odd-man rush in the second period, when the Kings managed four shots on goal. Hamonic also disrupted a breakaway by Tanner Pearson on the power play in the third period, delaying Pearson from shooting and allowing Rittich to make the save when Pearson did put the puck on goal.

Jeff Carter won an offensive-zone face-off with 44 seconds remains and Campbell pulled for an extra attacker, but the Kings could not beat Rittich.

After beating the Anaheim Ducks 4-1 on Tuesday in coach Willie Desjardins’ debut with the team, the Kings have lost two straight and scored one goal each in defeats against the Minnesota Wild and Flames.