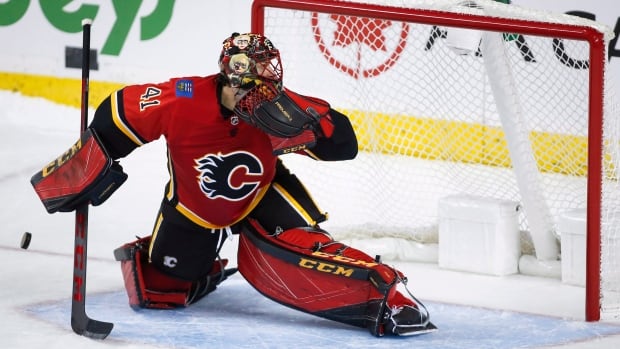 Nicklas Backstrom scored the winner in a shootout and goaltender Pheonix Copley earned his first win for the Washington Capitals in a 4-3 win over the Calgary Flames on Saturday.

Evgeny Kuznetsov scored a goal in the shootout and assisted on a pair of goals. Captain Alex Ovechkin also had an assist.

Matthew Tkachuk, Travis Hamonic and Elias Lindholm countered for Calgary (5-6-0) in regulation, who lost their third in a row. Johnny Gaudreau had two assists to reach a career 200.

Sean Monahan scored for the Flames in the shootout. Flames goaltender Mike Smith turned away 24 of 27 shots in regulation and overtime in the loss.

Copley stopped 27 of 30 shots in regulation and overtime and four of five in the shootout for the first NHL win of his career Saturday.

The 26-year-old from North Pole, Alaska., appeared in just his fifth NHL game Saturday. Copley hoisted the Stanley Cup with the Capitals last season when he was called up from the American Hockey League for the playoffs.

Tkachuk scored the equalizer at 18:33 of the third period tipping in a Rasmus Andersson shot from the blue-line.

The Caps pulled ahead 3-2 when Niskanen threaded a shot through traffic to beat Smith glove side at 17:03 of the second period.

The Flames drew even on Lindholm’s power-play goal at 16:54 of the first period. The Swede one-timed a cross-ice pass from Gaudreau for his seventh goal this season.

Gaudreau’s shot deflected off the leg of Hamonic at 14:42 for the defenceman’s first goal of 2018-19. Hamonic sat out games two through nine with a broken jaw suffered in the season-opener.

The No. 1 power play in the NHL struck at 14:27, when Washington’s Oshie backhanded a rebound over Smith after Ovechkin’s wrist shot.

Kuznetsov turned a Flames turnover into a two-on-none. He dished the puck to Vrana, who beat Smith stick side at 9:28.

Flames forward James Neal was hit hard into the boards in the first period. He skated to the bench favouring his left shoulder, but continued to play.

The Flames face the Maple Leafs in Toronto and the Sabres in Buffalo, N.Y., in back-to-back road games starting Monday.

The Caps don’t play again until Thursday’s game in Montreal against the Canadiens.