The Calgary Flames Foundation is defending itself against a scathing report by Charity Intelligence Canada that revealed the hockey team’s charitable foundation gave only 30 cents of every dollar raised to various causes.

The foundation ranked last in a list of eight charitable organizations attached to Canadian professional sports teams in terms of how much of a donated dollar goes to actual causes.

The report also found the Flames Foundation has a nearly $8-million reserve in the bank, and it does not post its audited financial statements online, which many other charities do.

One of the foundation’s board members, John Bean, who is also the president and COO of Calgary Sport and Entertainment Corporation, disputed some of these claims on the Calgary Eyeopener Thursday but said the organization realizes it could be more transparent with the donor community.

“Fair ball, so have heard that and we have nothing to hide, actually. So going forward in 2018, we are going to post our audited financial statements on the website and we are good with that,” said Bean.

One of the group’s concerns was the amount of money sitting in the foundation’s reserve account.

Charity Intelligence said the foundation put $1.2 million into the bank, boosting the non-profit’s reserves to $7.8 million at the end of the 2017-2018 season.

“The Calgary Flames is a puck hog. It’s hogging back the money and not doing all that it could to support all the charities in Calgary,” Kate Bahen, managing director of Charity Intelligence Canada, said Wednesday. 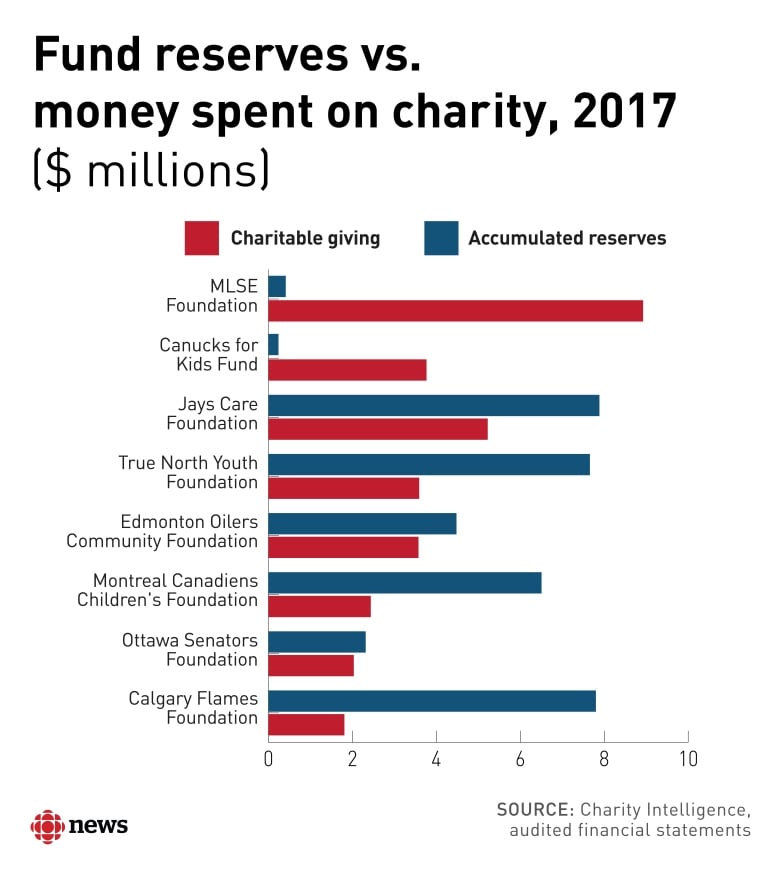 Bean said the large reserve is to ensure the charity can sustain long-term commitments and respond to emergency requests.

Bean said a good example of being able to be flexible is the response last year to the fatal ammonia leak at the Fernie Memorial Arena in B.C.

“We were able to write a cheque right away to help get an outdoor rink built in Fernie,” he said.

Bean said that since 1988, the Flames Foundation has distributed $32 million to charities throughout southern Alberta.

Bean also disputed the watchdog’s finding that the Flames Foundation gives only 30 cents for every dollar raised. He argued the rate of return is closer to 88 cents on the dollar.

Bean said that out of the nearly $4 million raised last year — which includes money from 50/50 draws, fundraising events and private donations — $500,000 was spent on operating costs, leaving the foundation $3.5 million to donate.

“I’m not going to get into a debate on math, I’m going to present how we look at our numbers,” he said. “It’s in our annual report. It’s on our website.”

Charity Intelligence said the annual report is not detailed, it doesn’t break down all the revenues and expenses. It also said that 88 cents is incorrectly calculated.

Charity Intelligence opted to not include 50/50 fundraising in its report because most people don’t consider it a donation, and they realize only half of it will end up going to a cause.

But the watchdog said if it did include it, then it would have to take into account the total amount collected, minus the cash dispersed as the prize, and associated costs. In that case, the rate of return for dollar raised would have been around 40 cents, rather than the 30 cents it calculated in its report.

Jim Beam, President and COO of CSEC and a member of the Foundation Board of Directors, responds to a report criticizing the way the Foundation spends donor dollars. 6:56

And it said Bean is underestimating operating costs, and not including fundraising costs associated with its popular golf and poker events.

Charity Intelligence said it stands by its evaluation, which is based on the foundation’s financial statements and followup correspondence with the Flames Foundation to clarify some figures.

“We are happy to hear that they plan to publicly post their audited financial statements going forward. Having the statements audited, with associated notes, will make it easier to understand where the funds come from and where they go,” said Greg Thomson, research director with Charity Intelligence Canada.