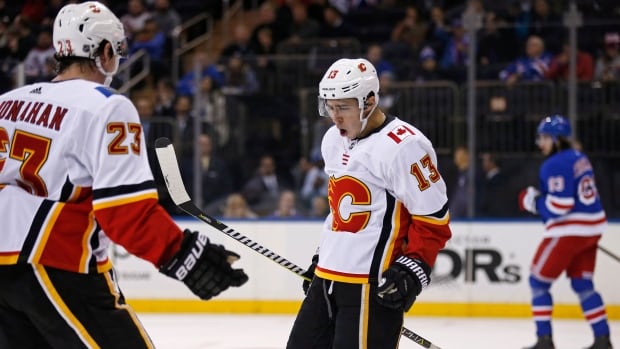 Johnny Gaudreau and Garnet Hathaway each scored twice and backup goalie David Rittich made 44 saves as the Calgary Flames beat the New York Rangers 4-1 on Sunday.

The Flames had lost on their last six visits to Madison Square Garden, but their speed and opportunistic play was superior to the Rangers on Sunday. Calgary scored three or more goals for the seventh straight game.

Mika Zibanejad scored for the Rangers.

Gaudreau opened the scoring at the 17-minute mark of the first period, backhanding the puck past Henrik Lundqvist. Sean Monahan picked up the assist.

Hathaway made it 2-0 at 12:21 of the second with his first goal this season. Gaudreau scored again at 14:55, extending the lead to 3-0 with his fifth goal of the season. Flames captain Mark Giordano assisted on the score, which was Gaudreau’s 300th career point.

The Rangers were coming off an overtime loss at Washington on Wednesday after winning in a shootout over Colorado the previous night. The Rangers have had trouble scoring goals under new coach David Quinn.

New York has yet to win in regulation. The Rangers have just 19 goals in their first eight games, including one shootout win and one in overtime.

Rittich, an undrafted 26-year-old goaltender from the Czech Republic, made 12 saves in the first period, 13 in the second and 19 in the third.

His only blemish was Zibanejad’s power-play goal at 6:41 of the third. Zibanejad’s third goal this season was assisted by Neal Pionk and Mats Zuccarello.

The Rangers had an excellent chance to narrow the deficit just over a minute later, but Rittich made successive saves on Jesper Fast and Zibanejad. Rittich denied Filip Chytil on a backhand from the slot with four minutes left.

Hathaway completed the scoring with his second goal at 18:07 of the third.

Gaudreau, who leads the Flames with 12 points, was a teammate of Ranger forwards Kevin Hayes and Chris Kreider at Boston College when the Eagles won the national championship.

Gaudreau was a fourth-round pick by the Flames in the 2011 draft. He has points in seven of Calgary’s eight games thus far.