Training camp has been turned upside down for the Calgary Flames because of an upcoming trip to China.

The Flames depart Sept. 11 for pre-season games against the Boston Bruins in Shenzhen and Beijing.

So over a week before other NHL players reported for physicals with their respective teams, the Flames were given the “voluntary option” to do testing Wednesday.

The veterans opted to empty their gas tanks a day before Flames rookies reported to do the same, instead of waiting until departure day.

“It definitely is optional and I think there was another day set up, but it’s so close, or on the day we were travelling, that for us as players we wanted to get in here early,” Calgary captain Mark Giordano said.

“We have a long flight to China and it will be good for us to be able to recover before we get on that plane and travel for all those hours.”

The Flames play pre-season games Sept. 15 in Shenzhen and Sept. 19 in Beijing.

Calgary will ice a split squad Sept. 19 with teams playing in both Beijing and Vancouver. Six more pre-season games follow over a nine-day span.

The Flames have a new head coach in Bill Peters and acquired high-profile players in the off-season.

Calgary moved defenceman Dougie Hamilton and right-winger Micheal Ferland to the Carolina Hurricanes at the June draft to get forward Elias Lindholm and defenceman Noah Hanifin.

“We’ll be spending more time with each other than at a normal camp, where it’s two to four hours at the rink and you go home,” centre Mikael Backlund pointed out.

“Here, you’ll hang out with the guys for eight days straight. I definitely believe that will help this group.”

The China games will begin to answer some questions for the Flames, not the least of which is who will play on the right side of centre Sean Monahan and left-winger Johnny Gaudreau with the departure of Ferland.

“Some of the names we brought in, skilled smart players I think will fit real well with me and Monny,” Gaudreau said.

“That’s what’s going to be great about China, going over there and building some chemistry with whoever you’re playing with and try to get off to a good start to the season.” 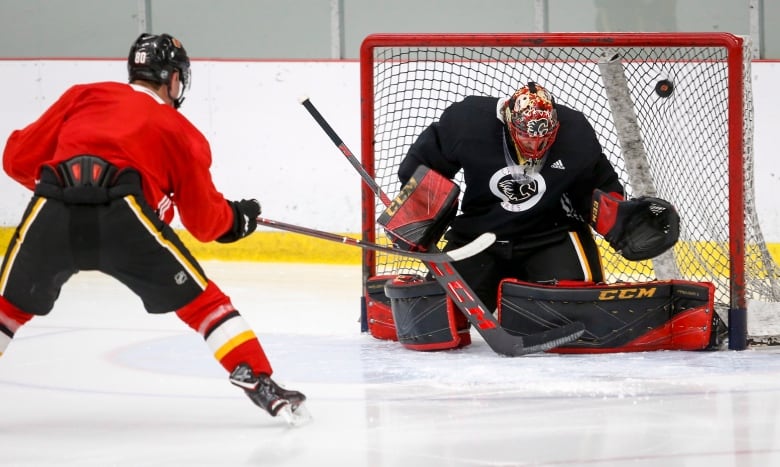 Neal, who signed a five-year, US$28.75-million deal with the Flames, is the prime candidate to start on the top line with Gaudreau and Monahan.

“Them both being left shots works out great, then you’re passing leftie to leftie,” Neal said. “Things opens up quick and I love having a left-handed centreman.

“I look forward to getting a chance to play with them. They’re guys that can shoot the puck, but they’re great passers.”

The NHL arranged pre-season games in China for the first time in 2017, when the Vancouver Canucks and Los Angeles Kings squared off in Shanghai and Beijing.

How much that travel impacts a team’s reserves at season’s end is a matter of debate.

The Canucks finished out of the post-season at 31-40-11, while the Kings (45-29-8) were swept in the first round of playoffs by the Vegas Golden Knights.

“That thought hadn’t even crossed my mind,” Backlund said. “We’ll find a way to keep the energy at the same level as normal.

“It’s a little stressful, all the flying and the time change. We have a lot of good people around us to prepare us. They’ve set out on paper how we should eat and sleep and all that. I don’t think it will be a disadvantage for us.”