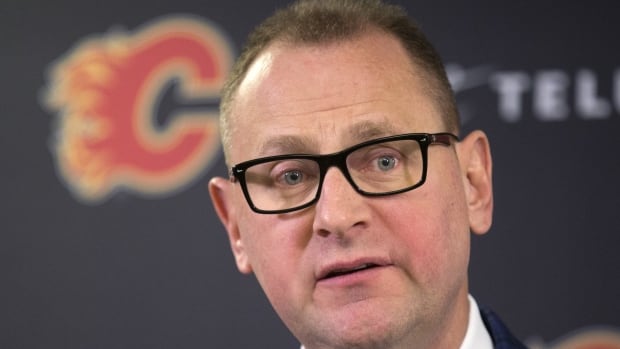 Prefacing his hopes that the Calgary Flames return to the ice soon with the acknowledgment that pro hockey is not a societal priority right now, general manager Brad Treliving remains optimistic.

“We remain hopeful that at some point we’ll be able to see what this team can accomplish if and when we get back together,” Treliving said Tuesday on a video conference call with reporters.

When the NHL suspended operations March 12 because of the oncoming COVID-19 pandemic, the Flames were in playoff position with a 36-27-7 record.

Calgary was third in the Pacific Division and four points back of the Edmonton Oilers.

The Alberta rivals would have concluded their regular seasons against each other Saturday in Calgary.

“It’s not lost on us Saturday night would have been a big night, the conclusion of the regular season and the final Battle of Alberta,” Treliving said.

“I’m sure there would have been lots of implications with that game and certainly leading up to start this week with the playoffs.”

Calgary Sport and Entertainment, which also owns the Western Hockey League’s Hitmen, National Lacrosse League’s Roughnecks and CFL’s Stampeders, awaits the rebooting of the sports world and the day it can continue pursuit of a Stanley Cup.

For an energy city hit by both the pandemic — over 800 cases — and basement oil prices, a distraction might be welcome.

“What we’re doing is way down on the list of important things,” Treliving pointed out. “I’ve got family members, nieces and aunts that are in the medical community.

“The people on the front lines, we want to recognize them both in our city, our province, throughout the country and globally.”

Calgary took slings and arrows to get to a playoff position. Defenceman T.J. Brodie collapsed in a mid-November practice to the alarm of his teammates.

Within days of Brodie returning to the lineup, head coach Bill Peters resigned following allegations he directed racial slurs at a minor league player almost a decade ago. Geoff Ward was promoted to interim head coach.

“Snowy is doing unbelievable,” Treliving said. “He’s an example to all of us when we think we’re having a tough day that others have other challenges in their lives that they’re not only meeting but exceeding.”

Captain Mark Giordano was sidelined for 10 games in February with a hamstring injury.

On the same day the NHL hit pause on the season, the Flames announced the death of longtime executive Ken King.

“Adversity doesn’t build character. It reveals it,” Treliving said. “I think we’ve been through a lot.”

Treliving says there have been no reports of Flames staff or players contracting the virus, nor is any testing being done.

Eight NHL players, from the Colorado Avalanche and Ottawa Senators organizations, have tested positive for COVID-19.

In his interrupted sixth season as Calgary’s GM, Treliving stays occupied with tasks that give him a feeling of accomplishment and regularly talks with players, staff, friends and family.

“The fact that you check in and see how they’re doing and you’re ready to help wherever possible, I think that’s really important,” Treliving said.

Preparing for an entry draft that will happen at some point, strategizing for the possibility the NHL will resume this summer, as well as planning for the 2020-21 season are Treliving’s three files these days.

“At some point it’s going to turn into a sprint and you can’t be in a situation where you’re just opening up the file for the first time,” he said.

NHL commissioner Gary Bettman raised the possibility Tuesday of not completing the regular season in order to squeeze in time to award the Stanley Cup.

He also said during an interview with NBCSN the league is considering playing games at neutral sites in the event not all teams will be allowed into their home rinks.

Calgary has banned all public events, which would include Flames games, until June 30.