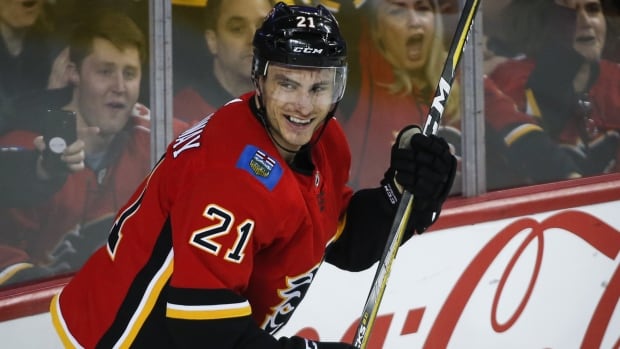 Andrew Mangiapane, Garnet Hathaway and Matthew Tkachuk each had a goal and an assist for the Calgary Flames in a 5-1 win over the visiting Ottawa Senators on Thursday.

Mike Smith made 18 saves for the win in a game pitting the top team in the NHL’s Western Conference against the East’s basement-dwellers.

Dylan DeMelo countered for the Senators (25-43-6). Craig Anderson turned away 31 shots in the loss.

Ottawa dropped to 3-6-1 since head coach Guy Boucher was sacked and Marc Crawford took over March 1.

Calgary opened up a six-point gap on San Jose atop the Pacific Division, but the Sharks had a chance to shrink it later Thursday in Los Angeles against the Kings.

Both the Flames and Sharks clinched playoff berths earlier this week.

The Senators played their second road game in as many nights following a 7-4 loss to Vancouver, where they’d scored all four goals in the last 11 minutes of the game.

WATCH | Hey Brady, may I have this dance?

Everyone felt like dancing in Calgary as Ottawa Senators rookie Brady Tkachuk made a few young fans’ nights during warmups, competing in a ‘floss-off’ and signing a jersey. 0:23

Matthew tipped in a Michael Frolik feed at 18:33 of the third.

The Tkchuk siblings tangled in the corner in the third period, when Matthew emerged with the puck to collect an assist on Backlund’s goal at 11:23.

Smith stoned an all-alone Brady from close range midway through the third period.

Backlund scored his 20th of the season beating Anderson glove side.

Mangiapane wristed Ryan’s cross-ice pass over Anderson’s glove at the nine-minute mark of the second period.

The trio capitalized on an Ottawa turnover in Calgary’s zone rushing the puck up ice for Hathaway to finish with a tap-in at 11:15 of the first period.

Ryan collected his 100th career point with his first of two assists.

Giordano pulled the hosts even, scoring shorthanded at 8:54 for his seventh point in six games.

Ottawa’s Bobby Ryan lost the puck in the neutral zone for a Giordano breakaway.

Anderson made the initial save, but Giordano jabbed the puck over the goal-line.

Anthony Duclair beat Flames defenceman Rasmus Andersson to set up an odd-man rush with Demelo, who scored at 4:30 of the opening period.

Duclair held the puck long enough to freeze Smith and dished to his teammate for the easy goal.