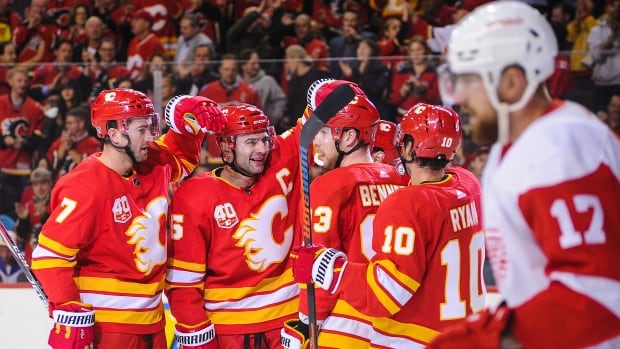 Mark Giordano had a goal and an assist to lead the Calgary Flames to a 5-1 victory over the Detroit Red Wings on Thursday.

Giordano was instrumental on the opening goal, firing a shot from the blue line that was deflected in by Andrew Mangiapane. He then capped a three-goal third period for the Flames with his second goal of the season on the power play at 8:47.

The reigning Norris Trophy winner, who turned 36 on opening night, has six points through the season’s first eight games.

Elias Lindholm, Sam Bennett and Derek Ryan also scored for Calgary (4-3-1), while Sean Monahan chipped in a pair of assists. The Flames improve to 3-0-1 at the Scotiabank Saddledome.

WATCH | McDavid vs. Milano: Whose goal was better?

Darren Helm scored for Detroit (3-4-0), which has lost three straight. The Red Wings wrap up their three-game Western Canada road trip on Friday night in Edmonton.

Making his seventh start, David Rittich (4-2-1) made 27 saves for the win. One of his best stops came in the opening minute when he stabbed out his pad to deny Dylan Larkin on a one-timer.