Sean Monahan and Elias Lindholm scored 55 seconds apart in the third period as the Calgary Flames downed the Toronto Maple Leafs 3-1 on Monday.

Lindholm and Monahan added an assist each as Calgary (6-5-1) snapped a three-game losing streak. Michael Frolik added an empty netter late to seal it while Mike Smith made 24 saves.

The Leafs, who were coming in off consecutive victories over the Winnipeg Jets, lacked jump in their first game without Auston Matthews after it was announced earlier in the day their star centre would miss at least four weeks with a left shoulder injury.

Monahan snapped a scoreless tie 4:39 into the third on a power play with his fifth goal of the season by burying Lindholm’s rebound.

Lindholm then gave the Flames, who were 0-2-1 over their last three, a 2-0 edge with his team-leading eighth at 6:34 after the Leafs turned the puck over in their own zone.

Toronto defenceman Igor Ozhiganov hit the post at the other end on the next shift, with teammate Zach Hyman unable to get to the loose puck.

The Leafs got to within one at 16:07 when Kadri scored his third of the season and third in as many games on a feed from Mitch Marner one second after a Toronto two-man advantage of 1:09 expired.

The Leafs pressed for the tie, but were unable to get another one past Smith before Frolik iced it with his fifth as Toronto fell to 3-4-0 at the newly-named Scotiabank Arena.

The Flames fell 3-2 in a shootout to the Washington Capitals in Calgary on Saturday — a result that, despite the final score, was viewed as a step in the right direction after getting blown out 9-1 by the Pittsburgh Peguins on home ice 48 hours earlier. 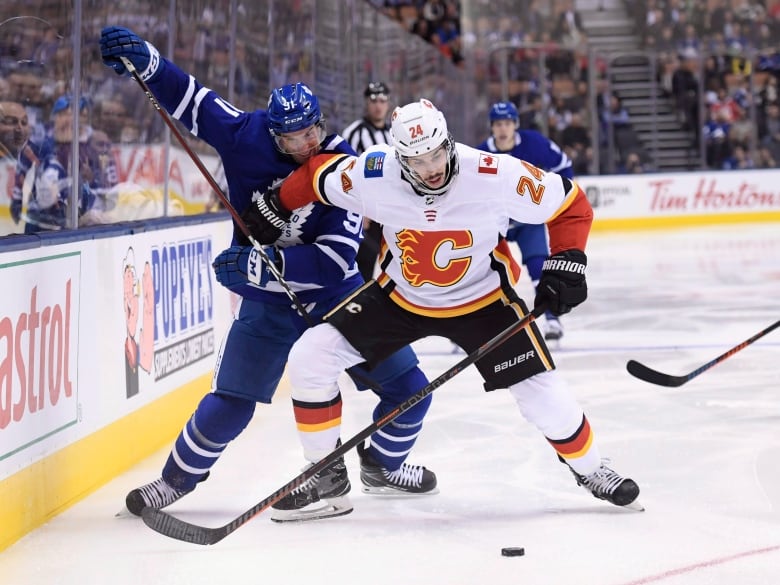 Andersen kept things scoreless early in the second when he shot out the right pad to stop Lindholm on a delayed penalty before Smith stopped Hyman at the other end from in tight.

Johnny Gaudreau cut around Leafs defenceman Jake Gardiner later in the period, but couldn’t get a shot away on Andersen.

The Leafs goalie stopped Matthew Tkachuk and Mikael Backlund in quick succession before John Tavares shovelled a loose puck off a scramble into Smith’s open cage just after the buzzer went to end the second period.

CBC’s Anson Henry gives some details on the new strategic sports gambling partnership the NHL has made. 1:47

The 21-year-old Matthews, who doesn’t require surgery for his damaged shoulder, was hurt on a clean check by Jets defenceman Jacob Trouba early in the second period of Saturday’s 3-2 comeback victory over Winnipeg as the Leafs forward cut to the net.

Matthews sustained a similar injury to his other shoulder last February and missed 10 games — his third stint on the sidelines in 2017-18 following back and concussion problems — but still managed to finish second on the team in goals (34) and points (63) in just 62 appearances.

He will sit out at least 13 games with this injury, and perhaps more if the recovery process stretches beyond 28 days.

Matthews has 10 goals (tied for second in the NHL) and 16 points (tied for sixth) through 11 outings this season — a ridiculous 75-goal, 119-point pace in an admittedly small sample size — despite being held off the scoresheet for 10 straight periods before the injury.

Having dropped four of their last five, the Flames had a couple of good chances to push ahead in a dominant first against the listless Leafs, including an effort off the post from Sam Bennett after Toronto defenceman Martin Marincin coughed up the puck.

With their best player on the shelf, the Leafs were forced to shuffle their lines over Saturday’s final two periods and again on Monday.

Kadri, who started the campaign as Toronto’s No. 3 centre, was reunited with Marner and Patrick Marleau after the trio clicked in the second half 2017-18, while Tavares played between Hyman and Kasperi Kapanen to round out the top-6 forward group.

The Leafs are also still without winger William Nylander, who was slated to start the season alongside Matthews and Marleau following the addition of Tavares this summer, as the restricted free agent and the club remain at odds over a new contract.

“It’s frustrating,” Matthews said of his injury prior to Monday’s game. “There’s not much you can do.

“I’m going to work as hard as I can to get back as soon as possible.”