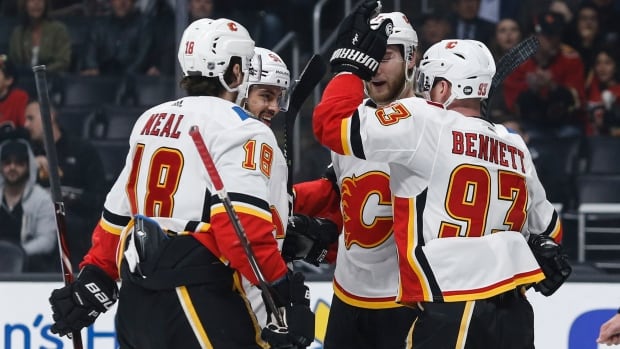 Derek Ryan scored twice while Mark Jankowski netted one goal and two assists as the visiting Calgary Flames leaned on their lesser lights one night after securing top spot in the Western Conference and still throttled the Los Angeles Kings 7-2 on Monday night.

The Flames (50-23-7, 107 points) sat out their top four defencemen — Mark Giordano, TJ Brodie, Travis Hamonic and Noah Hanifin — as well as second-line forwards Mikael Backlund and Matthew Tkachuk, yet goalie David Rittich needed to make just 23 saves for Calgary, which has won three straight and nine of its last 12.

The score was tied 2-2 after the first period, but the Flames scored five unanswered goals to reach the 50-win mark for the second time in franchise history. The only other time they reached that feat was the Stanley Cup-winning 1988-89 campaign.

Johnny Gaudreau netted the winner at 6:46 of the second period with his team-high 36th goal and 97th point of the season, burying a sharp-angled shot inside the far post.

Then the visitors broke the game open with four goals in the final frame. James Neal scored 13 seconds into the third period and then set up Ryan’s redirect goal at 2:33 of the period to make it 5-2.

Andrew Mangiapane scored at 8:30 and then Jankowski tallied 15 seconds later, which spelled the end of the night for Kings goaltender Jonathan Quick, mercifully pulled after being victimized for seven goals on 25 shots in favor of Jack Campbell.

Gaudreau and fellow top-liner Sean Monahan played less than 13 minutes each as the Flames began the process of resting players as much as possible down the stretch during what will be two more games that will mean nothing to the playoff picture.

Ryan and Sam Bennett — who left the game after taking a late and high hit from Kurtis MacDermid in the second period — traded first-period goals with Kyle Clifford and Dustin Brown, who was honored prior to the game for becoming the Kings franchise leader in games played last week. Anze Kopitar assisted Brown’s goal in his 1,000th NHL game for the Kings (29-41-9, 67 points).