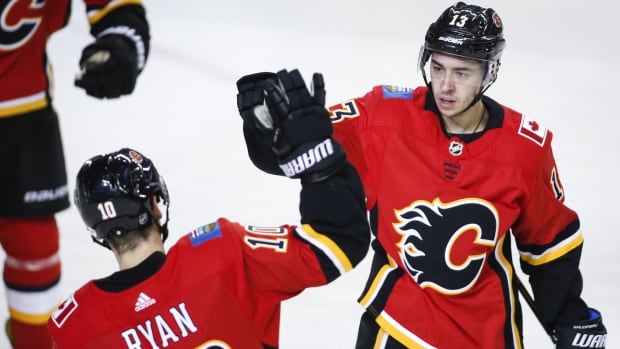 A 31-save outing by goaltender David Rittich helped the Calgary Flames to a 4-2 win over the visiting Columbus Blue Jackets on Tuesday.

Austin Czarnik assisted on a pair of goals, while Rittich won his fourth start in a row.

The Flames (45-21-7) were the first Western Conference team to clinch a playoff spot Sunday.

With nine games remaining in the regular season, their objective is staying atop the Pacific Division and ahead of the San Jose Sharks.

San Jose was idle Tuesday but a playoff spot was assured when the Minnesota Wild lost to the Colorado Avalanche.

Columbus (40-29-4) holds down the Eastern Conference’s final wild-card spot one point up on Montreal following the Canadiens’ 3-1 win in Philadelphia Tuesday.

Mangiapane scored with seven seconds left in the first period and Frolik 35 seconds into the second for an early 3-1 cushion.

Columbus shooters rang the puck off the Calgary’s post three times during the first 40 minutes.

Bjorkstrand’s power-play goal at 5:28 of the third period pulled the visitors within a goal. His wrist shot from the face-off circle rolled up and over the left shoulder of Rittich.

Flames defenceman Noah Hanifin blocked a shot with the back of his head midway through the second period. He left the game, but returned for the third.

Blue Jackets Lukas Sedlak and Ryan Dzingel both shot the puck off Rittich’s left post during the last three minutes of the first period.

But Calgary led 2-1 on Mangiapane’s goal with the clock ticking down. He had half an open net to score with a backhand when Bobrovsky lost track of a Mark Jankowski feed through traffic.

Gaudreau pulled the Flames even at 12:44.

From the behind the goal-line, Derek Ryan threw the puck to Gaudreau in the high slot for the winger to collect his team-leading 35th goal of the season.

Werenski made the most of a neutral-zone turnover by Calgary for the game’s first goal.

The defenceman hustled the puck into the offensive zone and beat Rittich with a wrist shot at 10:25.