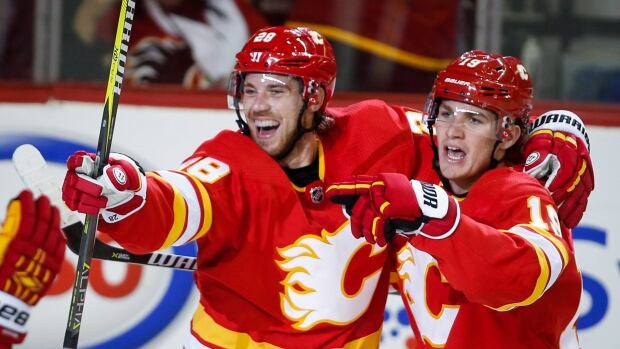 Elias Lindholm scored his first two goals with the Calgary Flames in a 7-4 win Saturday over the visiting Vancouver Canucks.

The Swede, acquired from the Carolina Hurricanes in a trade at the June draft, scored a power-play goal for the game winner at 14:28 of the third period.

Gaudreau had a goal and two assists joining Lindholm in a three-point night as the latter also had an assist.

Flames starter Mike Smith made 16 saves for the win, while Markstrom had 30 saves in the loss.

Elias Pettersson scored two goals and assisted on another for the Canucks, who beat the visiting Flames 5-2 in Wednesday’s season-opener.

The 19-year-old Swede has five points in his first two career NHL games. Brandon Sutter scored shorthanded and Bo Horvat also had a goal for Vancouver, which led 4-3 heading into the third period.

Monahan’s power-play goal at 9:27 of the third period deadlocked the game 4-4. After the centre re-directed a cross-ice Gaudreau pass by Markstrom, Smith robbed Goldobin with a glove save.

Penalized for hauling down Pettersson near Calgary’s net late in the second period, Flames defenceman Michael Stone joined Giordano in the penalty box for a Canucks two-man advantage.

Horvat re-directed Pettersson’s feed for a power-play goal at 16:57.

Tkachuk tucking the puck into the corner of Vancouver’s net during a goal-mouth scramble did not survive a coach’s challenge in the second period.

But Gaudreau then banged in a rebound off a Monahan shot for a power-play goal at 9:31 to even the score 3-3.

Pettersson scored his second goal with a laser from the face-off circle at 2:52 on the power-play.

Giordano tied the game 2-2 at 17:08 of the first period. Calgary’s captain beat Markstrom with a wrist shot from the top of the face-off circle.

Pettersson swept the puck by Smith’s glove from the slot at 13:50 for his first goal of the night.

Lindholm scored his first goal as a Flame just 12 seconds after the opening puck drop.

After winning the offensive-zone faceoff, the Swede tipped T.J. Brodie’s wrist shot from the boards by Markstrom.

Calgary was minus defenceman Travis Hamonic on Saturday because of a facial fracture he sustained in a fight Wednesday with Canucks defenceman Erik Gudbrandson.

Noah Hanifin moved up to partner Stone on Calgary’s No. 2 defensive pairing. Dalton Prout drew into the lineup alongside rookie Juusu Valimaki, who turned 20 on Saturday.

The Flames embark on a three-game road trip starting Tuesday in Nashville. The Canucks have another five games remaining on a six-game swing away from Rogers Arena.