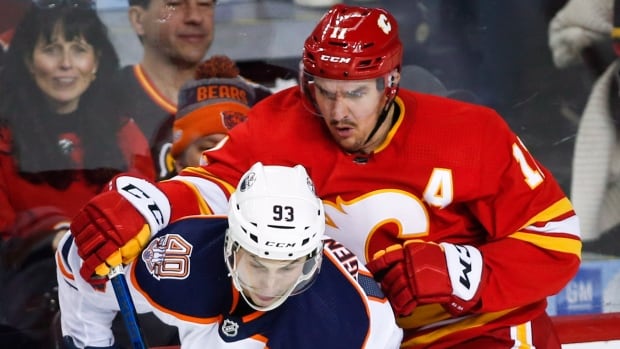 Elias Lindholm scored twice including the game-winner on Saturday night as the Calgary Flames took over top spot in the Pacific Division with a 4-2 comeback victory over the Edmonton Oilers.

After deflecting Noah Hanifin’s point shot into Mikko Koskinen’s pads, Lindholm knocked in the rebound at 9:10 of the third period. He later added an empty netter for his 11th goal of the season. His career high is 17.

Hip Check: Things got nasty in the Battle of Alberta

The long anticipated ‘Battle of Alberta’ features 11 penalties in the first period 1:03

Sean Monahan, with a goal and an assist, and Derek Ryan also scored for Calgary (11-8-1). The Flames continue their homestand on Monday night when they play host to Vegas.

Connor McDavid, with his 11th, and former Flame Alex Chiasson scored for Edmonton (9-9-1), which has lost five of its last six. The Oilers return home right after the game, where they will play Vegas on Sunday night.

Down 2-1 entering the third period, Calgary tied it at 2:40 when Monahan rattled home a rebound of a Travis Hamonic shot.

It’s the NHL-leading sixth time the Flames have come back to win a game in which they’ve trailed after two periods.