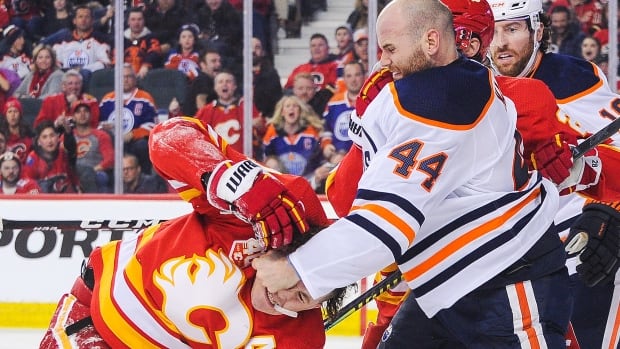 The Calgary Flames just want to move on. They want to stop answering questions about left-winger Matthew Tkachuk’s feud with Edmonton Oilers forward Zack Kassian and they want to put a disappointing 2-0 loss to the Canadiens behind them.

Veteran left-winger Milan Lucic actually believes that the distraction of the Tkachuk-Kassian rivalry had a direct impact on Calgary’s performance in Montreal on Monday. He and his teammates were unanimous that the Flames had to focus on Thursday’s game in Toronto and then Saturday’s game in Ottawa ahead of the all-star break.

“Personally, I think our focus is a little bit too much on [Kassian and Tkachuk] because you saw how we go into Montreal on Monday night and all we’re talking about is what happened on Saturday and we don’t come out to play,” said Lucic on Wednesday after practice at Scotiabank Arena. “Those two points were just as big as the ones we got on Saturday.

“There’s almost too much focus on one thing when our focus right now should be on the Maple Leafs and what we have to do to win a hockey game.”

Kassian was suspended by the NHL for two games for grabbing Tkachuk by the collar, throwing him to the ice and punching him several times while the Flames forward turtled to fend off the blows. Kassian was enraged after Tkachuk lined him up for a pair of big hits in Calgary’s 4-3 win over the Oilers on Saturday.

After news of the punishment was announced Kassian doubled down, telling reporters on Tuesday that Tkachuk was playing with fire and that “he messed with the wrong guy.” Kassian’s first game back from suspension will be on Jan. 29 when Edmonton hosts Calgary.

Tkachuk wasn’t made available to reporters on Wednesday, but his Flames teammates were clear that the 22-year-old forward has their support on and off the ice.

“We got [Tkachuk’s] back. We’re a team, we’re family,” said Rinaldo, who apologized to reporters for being curt with them on the subject of Tkachuk. “I think that’s the main thing that we have everybody’s back and we love each other in here. And I think that’s all [that] really needs to be said about the whole situation. We’re not thinking about it.”

The task at hand

“To be dead honest with you? I don’t I don’t pay no attention to media, no interviews. I don’t read anybody’s comments. I stay out of that,” said Rinaldo. “All I know is that we’re focusing on tomorrow night’s game, Toronto. We didn’t like the way we came out last game in Montreal, I think we were dwelling in the past a little too much.

“Our main focus, our only focus right now, is the task at hand against the Leafs.”

Lucic, Rinaldo, Johnny Gaudreau and captain Mark Giordano all seemed to be sticking to the same talking points when it came to Tkachuk, but head coach Geoff Ward said that wasn’t his doing.

“I didn’t go in and talk to them about it at all,” said Ward. “I think we’ve got a veteran enough core that they understand exactly what’s going on. We trust our players that they put themselves in a position that they know exactly where they’re at, and what they need to worry about and focus on.”