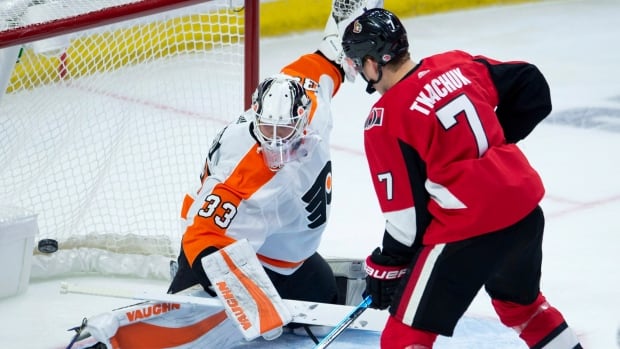 Brady Tkachuk scored his first NHL goal, finishing with two goals and an assist, but the Ottawa Senators fell to the Philadelphia Flyers 7-4 on Wednesday.

Jakub Voracek and Scott Laughton led the way for the Flyers (2-2-0) with two goals each, while Sean Couturier, Robert Hagg and Claude Giroux also scored. Calvin Pickard made 31 saves for the win.

Maxime Lajoie also had two goals and an assist for the Senators (1-2-1), who were playing the first of a five-game home stand. Craig Anderson stopped 37 shots.

A five-goal outburst saw the Flyers jump out to a 4-3 lead after the second.

Tkachuk, making his home debut with the Senators, was thrilled to notch his first career goal as he redirected a Chris Tierney shot off his skate on the power play to give Ottawa a 1-0 lead.

The Senators 4th overall pick in the 2018 draft opened the scoring against Philadelphia on Wednesday. 0:29

With the marker, he also earned the bragging rights as the fastest Tkachuk to score in the NHL. It took his father Keith Tkachuk five games and his brother Matthew Tkachuk, who plays for the Calgary Flames, four games.

The Flyers tied the game on a power-play goal of their own as Voracek, at the side of the net, redirected Shayne Gostisbehere’s one-timer.

Tkachuk picked up his second of the night as he carried the puck in and beat Pickard shortside, but less than two minutes later Couturier grabbed a rebound and backhanded it past Anderson to tie the game 2-2.

The Flyers took the lead on Voracek’s second of the night as he showed great patience before beating Anderson five-hole. This time it was the Senators who managed to tie things back up as Lajoie jumped up into the play and fired a rebound past Pickard to make it 3-3.

Philadelphia finished the period with the lead as Thomas Chabot missed an opportunity to clear the puck down low and Laughton beat Anderson off a backhand.

The game took a nasty edge in the second and continued in the third.

Tkachuk endeared himself to fans with his scoring touch, but also showed his propensity to mix things up when he took a double minor for roughing early in the final frame.

The Flyers didn’t score on the ensuing power play, but did shortly after as Hagg picked up his second of the season.

Giroux scored his first goal of the season to make it 6-3 late in the period with a power-play goal.

With the victory, Philadelphia rebounded from an 8-2 loss to the San Jose Sharks in its home opener Tuesday.