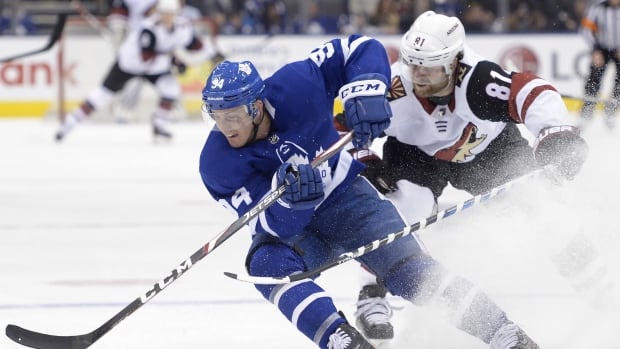 Tyson Barrie is trying to keep things in perspective.

More than 80,000 people in Canada are confirmed to have been infected with COVID-19, and the country’s death toll has surpassed 6,000. Many more have lost jobs, are struggling financially and worried about the future.

Barrie, meanwhile, is a healthy professional athlete with millions in the bank. The Toronto Maple Leafs defenceman understands his problems pale in comparison to most, but there are still unanswered questions to ponder in the many moments between workouts and long walks with his dog on sun-soaked Vancouver Island.

Like, will there be an unorthodox summer of playoff hockey should the NHL get the green light to return? Or will Barrie’s next chapter be written in unrestricted free agency — one that will no doubt be significantly impacted by the financial realities of the global pandemic?

“It’s a weird time to be heading into free agency,” Barrie said on a conference call Wednesday. “With everything going on, we’re still not certain what’s gonna play out here… that extends into free agency.”

Set to turn 29 in July, the right-shot blue-liner with plenty of offensive punch looked primed for a massive raise after being acquired by Toronto from the Colorado Avalanche last Canada Day with one season left on a four-year, $22-million US contract he signed in 2016.

The feeling was Barrie would be one of top prizes on this summer’s unrestricted free agent market, especially coming off 57- and 59-point seasons, and the fact he was set to be plunked into the middle of the Leafs’ talent-loaded roster.

Barrie instead got off to the worst start to his professional career — he registered just seven assists and was minus-11 through 23 games — before things started to turn after Sheldon Keefe replaced Mike Babcock as head coach.

A rejuvenated Barrie went on to put up five goals and 32 points over the next 47 games, but sprinkled in the middle were some uncomfortable days before the trade deadline when it looked like the Victoria native might be on the move.

WATCH | How will hockey in empty arenas look?

Things were again looking up when the pandemic hit, which not only forced the NHL pause, but put pending high-profile UFAs like Barrie in potentially awkward positions.

“You work a long time to get to a point where you’re a free agent and teams want you,” Barrie said. “There’s been moments where it seems a little dire, but I think for me, just keep in perspective what is going on in the world and how fortunate of a position I happen to be in.”

Meanwhile, Barrie also conceded the playoff scenarios being proposed aren’t “ideal,” but added all parties have to be willing to make sacrifices.

“In a time like this how can anything be super traditional?” Barrie said. “The integrity will be there because it’s still going to be the best players in the world playing against each other for the ultimate goal of winning the Stanley Cup. It will certainly be weird without fans or whatever the scenario unfolds to be, but I think we all have to adapt.”

As for the deal to the Leafs last summer, Barrie admitted the swap from Denver to Toronto was a challenge.

“I’m not sure I gave enough credit to guys who get traded and have to change their whole lives and move and come into a new team and fit in right away,” he said. “It’s a little tougher than I gave credit for. I’m glad I’ve had the experience to see that firsthand.”

A veteran of 575 regular-season and playoff games, Barrie added he was happy with the way he battled in a pressure-packed market.

“I didn’t try to change my game, which I’m proud of myself for,” he said. “I was obviously trying to improve, but just be true to what type of player I am and have been. I’m grateful it turned for me.”

Barrie looked in line for a contract in the neighbourhood of $8 million annually 12 months ago, but with the salary cap unlikely to go up, his roller-coaster season and league revenues taking a drastic hit, it’s hard to know where his number will eventually fall, and with what team.

“It’s got to be the right fit,” he said. “It has to be a spot where they obviously are in need of someone like myself and a good team headed in the right direction. There’s a lot of good organizations that tick those boxes.

If the league does return in some form this summer, it will likely be Barrie’s swan song in Toronto. The Leafs had to bend over backwards to get under the salary cap last season — Colorado picked up half of Barrie’s $5.5-million hit — and he definitely sounded like a player on his way out the door Wednesday.

But before that happens, Barrie would like another opportunity to pull on his blue and white sweater.

“It’s an odd time,” Barrie said. “But at this point, all I’ve got to do is focus on getting ready to play if we are going to play and take a run with the Toronto Maple Leafs in the playoffs. That’s why they brought me in and that’d be pretty spectacular.

“Hopefully we get a chance to do that.”