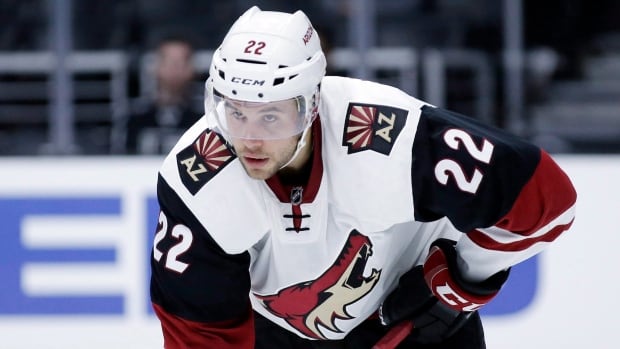 The 28-year-old posted a video to Instagram on Wednesday that shows him taking a quick spin around an arena in San Diego, deftly carving the ice using a prosthetic leg.

By Friday, the clip had been viewed nearly 600,000 times and garnered hundreds of comments calling Cunningham an inspiration.

“I was pretty surprised. I wasn’t totally paying attention. If you look at my social media profile, I wouldn’t say I’m a very good social media doer,” Cunningham said by phone from Phoenix on Friday.

“I was more just trying to thank the [American Hockey League’s San Diego] Gulls and [coach] Dallas Eakins for letting me on the ice, kind of just show ‘Look at this new skate that I have.’ And show that I can continue to do stuff, that it doesn’t matter if you have an amputation. I didn’t think it was going to blow up the way it did.”

The clip blew up because of what happened to Cunningham more than two years ago.

The native of Trail, B.C., was warming up for a game with his AHL team, the Tucson Roadrunners, when he suffered cardiac arrest and collapsed on the ice.

Advanced medical procedures saved his life but a complication required doctors to amputate part of Cunningham’s left leg, ending his time as a professional hockey player.

Picked up by Boston in the seventh round of the 2010 draft, the former star of the Western Hockey League’s Vancouver Giants played a total 63 games with the Bruins and Arizona Coyotes over his NHL career.

The journey back to the ice has been long and bumpy, Cunningham said.

Rehab was tough. Cunningham had to learn how to walk again, and fought pain and discomfort the entire way.

His background as an athlete helped.

“I was already used to pushing my body to the limits and pushing it a little further when I didn’t think it could go any farther,” he said.

About three months after the accident, Cunningham tried skating for the first time.

The experience was disheartening.

“I was pretty let down after. My leg wasn’t healed. I was maybe pushing things a little quicker than I should,” he said. “So I kind of took a deep breath, took a step back and let myself heal. It’s been a lot better ever since.”

Over the years, Cunningham tried a few different set ups in an effort to get back on the ice, including a skate boot on a prosthetic leg, but he couldn’t find a rig that was comfortable.

Then, a few months ago, he started working with Peter Harsch Prosthetics.

A specialist in making prosthetics for elite athletes, Peter Harsch crafted a leg that attaches to a light, streamlined skate blade.

Finally, Cunningham had something that felt good.

In the video posted this week, he streaks across the ice in big arcs, stick in hand, as he confidently crosses over. He turns backwards and his balance falters slightly. Cunningham turns to the camera, a grin on his face.

Being able to skate comfortably again was key for Cunningham, who’s been working as a pro scout for the Arizona Coyotes since May 2017.

“I didn’t want to be physically restricted to one role or one job,” he said. “I wasn’t really sure if I’d be able to coach or get back on the ice regularly. But this gives me some hope moving forward here.”

Working as a scout has been a drastic change for a young man who’s playing career was cut short.

Cunningham describes his first few months on the job as tough.

“I still wanted to be out there and I missed it every day,” he said. “I think at some point I was being a little selfish and I had to realize ‘Hey man, these are the cards that you were dealt and you were lucky enough to play and be a part of the hockey family. And you’re still involved.”‘

This season, he’s come to love his work and found a new passion outside of competing on the ice — discovering other talented athletes who’ll boost the Coyotes’ organization.

Being able to join what some players call the “dark side” at a young age has allowed Cunningham to be a sponge and soak up knowledge from everyone around him.

“Hockey’s given me everything that I have today and now I have an opportunity as well to kind of give back in a different way,” he said.

He’s also giving back to the community that saved his life through the All Heart Foundation, which uses technology to research and help prevent cardiac arrests.

Doctors were never able to pinpoint what caused Cunningham’s healthy heart to fail, and he’s since heard many similar stories.

He wants to use his experience to create change.

“The technology nowadays is so good, but instead of using the smart technology on saving lives, we’re putting out iPhone 13s,” Cunningham said, adding that the foundation plans to release a new app in about six weeks.

“We really think it’s going to make a difference in saving people’s lives.”