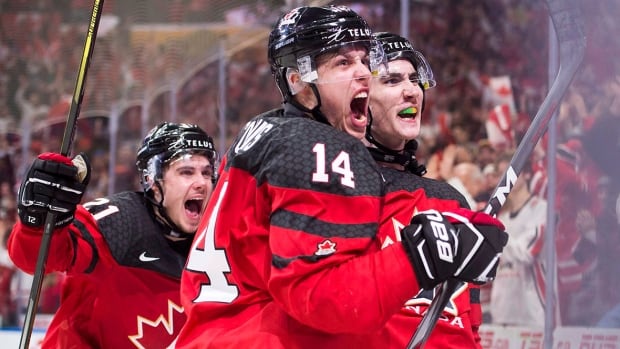 Alex Formenton and Maxime Comtois know what it takes to capture world junior hockey gold and now they’re sharing their wisdom with a whole new squad.

Both of the young forwards were part of the Canadian team that captured the championship in Buffalo, N.Y., last January after defeating Sweden.

They each keep the championship rings they earned next to their beds, a hefty memento to provide daily motivation.

“Every time I wake up, I just want to be better than I was the day before,” Comtois said Monday in Kamloops, B.C., where he’s on the Canadian roster at this summer’s world junior showcase.

Canada has 39 players at the event, a group that will eventually be whittled down to the team playing in the annual world junior tournament in Vancouver and Victoria this winter.

Comtois and Formenton are the only ones at the showcase who were also part of last year’s gold medal-winning group. St. Louis Blues prospect Robert Thomas was invited, but is reportedly recovering from an ankle injury.

Being a veteran means taking on a leadership role, Formenton said.

“I’m not a very vocal guy, but I want to lead by example out on the ice and help out my teammates as much as I can,” said the 18-year-old Ottawa Senators prospect, who got into one NHL game at the start of last season.

Formenton said tournament experience taught him that the play is faster than what most young guys are used to.

“You’re playing against top guys of every country,” he said.

Despite last year’s success, the new team starts from the bottom with a clean slate and will have to put in major work to win, said Comtois, who was drafted by the Anaheim Ducks in 2017.

Tyler Steenbergen scored with less than two minutes left in the third, leading Canada to a 3-1 win over Sweden. 1:54

For the returnees, that work will include taking the experience and using it to help guys who are new to the roster.

“It’s going to be our job to build the chemistry of the team,” said the 19-year-old.

The young men playing for Team Canada at the showcase hail from across the country, from South Surrey, B.C., to Summerside, P.E.I. But many have played together previously, in development camps, junior hockey clubs and university teams.

Coming together as a group will be key to winning, said Tim Hunter, head coach of the junior national team.

This is Hunter’s first year at the helm, but he’s been an assistant coach for the last two years.

“We’re going to be a different team than the past two years where we won silver and gold and had a lot of success,” he said.

“So these guys are going to have to come together as a group, get really close — because close teams win — and write our own story.”

The tight-knit bond of last year’s squad was evident to Morgan Frost, even as the centre watched at home.

“You could just kind of tell,” he said. “They had such good chemistry on the ice and they wore teams down, they worked hard and they played for each other.”

Defenceman Ty Smith saw a high-speed, physical game as he watched last year. Being part of that action is something he’s wanted since childhood.

“[Playing in the world juniors] is kind of something that you always dream about as a kid. I watch it every year on TV at Christmas time,” he said.

Smith and Frost said they’ve both had other players tell them how special the experience is, and believe playing on Canadian soil will only amplify that feeling.

Whoever makes the team will have big skates to fill. Canada has won gold 17 times in the 42-year history of the world men’s under-20 championship.

Frost said everyone at the summer showcase plans to add to that legacy.

“I think every guy in that room that will make the team will expect to win gold,” he said.