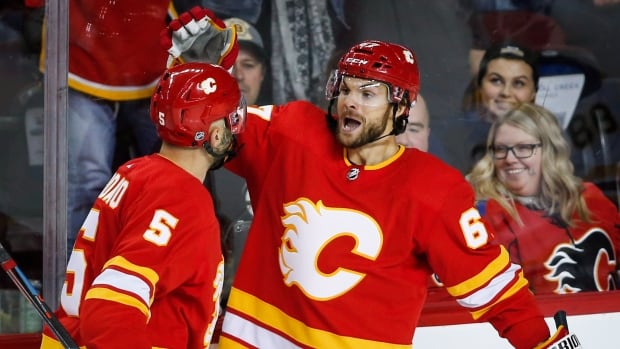 Michael Frolik scored a pair of goals for the Calgary Flames in a 5-2 win over the visiting Boston Bruins on Wednesday.

The veteran winger had been a healthy scratch in Calgary’s previous game — a 3-2 overtime win over the host Colorado Avalanche on Saturday.

Mikael Backlund and Michael Stone each contributed a pair of assists to Calgary’s second straight home win to open the season. Flames goaltender Mike Smith stopped 24 of 26 shots for the victory.

Patrice Bergeron countered for the Bruins (4-2-0) with a goal and an assist. Brad Marchand also scored.

Bruins netminder Tuukka Rask turned away 24 shots in the loss.

The Bruins trailed 4-2 heading into the final period. Marchand was lightly defended when he scored at 13:45 of the second. He took a pass from the far boards from Bergeron and wired the puck by Smith.

Frolik nearly completed a hat trick on a short-handed breakaway, but backhanded the puck over Boston’s net.

The Czech’s second goal stemmed from a Boston turnover in the offensive zone. Backlund flipped the puck across the slot for Frolik to tap over Rask’s stick at 3:32.

On Boston’s first rush after killing off Calgary’s two-man advantage, Bergeron scored at 2:40 on a give-and-go with David Krejci.

A David Pastrnak goal late in the first period didn’t survive a coach’s challenge by Calgary’s Bill Peters as the Bruins were ruled off-side.

With Sam Bennett creating havoc in front of Rask, the 20-year-old’s shot from the top of the circle rolled over the goaltender and over the goal-line.

Gaudreau collected his century goal at 15:20. At the top of the crease, Sean Monahan batted the puck down low to his winger and Gaudreau scored on a sharp-angled shot.

Frolik had half an open net for a target following a nice passing play by Tkachuk and Backlund.

Tkachuk hustled into the offensive zone to backhand the puck to Backlund moving into the slot. Backlund flipped the puck over to Frolik to score at 4:36.

The Flames are at home to the Nashville Predators on Friday. The Bruins are in Edmonton on Thursday for the second game of a four-game road trip.