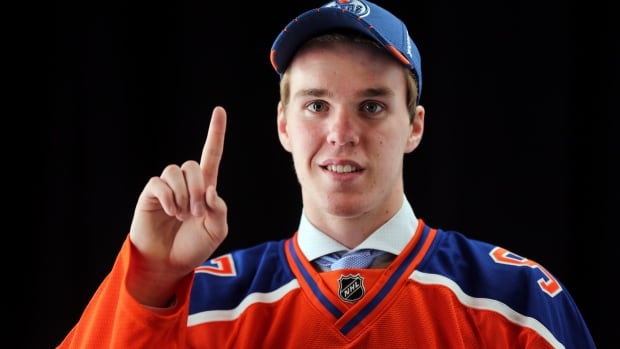 Okay, we knew that back when he was playing midget and scouts officially gave him the middle name “Future-First-Overall-Pick.”

Tuesday night, McDavid played the 300th game of his career. He picked up an assist, giving him 394 in his career so far. You would be hard-pressed to find someone who doesn’t think he is the best in the game right now. (And even if you could, they would be what I like to call “wrong.”)

Sure, it’s “just” 300 games, but he is well on his way to becoming one of the all-time greats. Don’t believe me? Let’s take a look at some of McDavid’s numbers.

I would call that a who’s who of hockey royalty. Combined, they’ve won 26 Stanley Cups, eight have plaques in the Hall of Fame, and all but two (Nilsson and Lindros) went on to finish with more than 1,000 career points. Considering most of them played in the 80’s when a 6-4 final was considered a defensive battle, McDavid’s points total is that much more impressive.

WATCH | Who deserved to be the No. 2 pick in McDavid’s draft?:

The 2015 NHL draft class featured Connor McDavid, but he wasn’t the only superstar to come out. After the Oilers’ star, who would you want on your team? 1:20

You read that correctly, McDavid is fifth all-time in points per game. (I’m cheating a bit here because official NHL records don’t count this until a player hits 500 career points. But I’m going to call his career thus far a fair sample size.) Sure, he hasn’t even come close to the “slow down” period of his career where grey hair shows up and this number starts to fall, but he sure is building himself a good cushion for when it does.

Not a bad list to find yourself on, especially seeing as how The Great One, Mario, and Orr have combined for the 14 best assist seasons in NHL history. A McDavid goal is usually a thing of beauty, but his vision and playmaking skills are from another planet. Something tells me this one will continue to rise.

Other players who had both by 300-game mark: Gretzky, Lemieux, Orr, Crosby, Alex Ovechkin, Jean Beliveau

McDavid has one Hart and two scoring titles despite being on an under-performing hockey team for most of his career. And his three total Hart/Art Ross trophies in 300 games are second only to Gretzky (three Harts, two Art Ross).

Okay, this one puts him 26th all-time, so he still has a mountain to climb to move up this list. However, if he can hit the century mark this season that will be four in a row. The last time that happened was back in 1993 when Steve Yzerman and Brett Hull did it.

The duo in Edmonton is piling up the points and the Oilers are reaping the benefits. 1:18