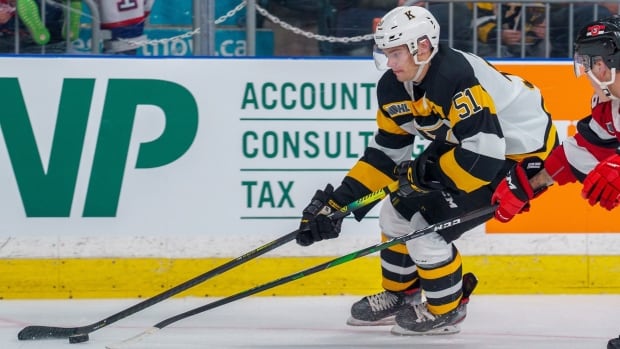 With his name already being mentioned in the same sentence as NHL stars John Tavares and Connor McDavid, forward Shane Wright could have buckled to the pressure in his first season with the Kingston Frontenacs.

Wright instead found a way to deal with the white noise surrounding him and played beyond his age, and on Thursday was awarded for his exceptional season by being named Ontario Hockey League rookie of the year.

“I just tried not to focus on the outside distractions. I already had high expectations for my play,” said Wright, who played the 2019-20 campaign as the youngest skater in the OHL.

“This was one of my goals coming into the season and I’m very honoured.”

Wright, who is eligible for the 2022 NHL Draft, was the fifth skater all-time to be granted exceptional-player status for the OHL by Hockey Canada in the spring of 2019, allowing him to enter the season as a 15-year-old when the Frontenacs selected him No. 1 at the draft.

The native of Burlington, Ont., who turned 16 on Jan. 5, joined an elite group to be given early admission to the OHL alongside forwards Tavares and McDavid and defencemen Aaron Ekblad and Sean Day.

He went on to finish the shortened 2019-20 season by leading all first-year skaters with 39 goals and 66 points in 58 games.

Early scouting reports suggest that the right-handed centre could be the No. 1 NHL pick in 2022, like Tavares and McDavid before him.

Frontenacs general manager Darren Keily believes Wright will only continue to get better before his name is called by an NHL team.

“Shane has just basically scratched the surface of what his potential is,” Keily said. “That’s what makes his and our future so exciting. We are blessed to have the opportunity to watch him grow as a player.”

With his coaches and teammates highlighting maturity as one of his top qualities — along with a booming shot — Wright was named an alternate captain in his first season with Kingston.

“I feel wherever I go I try to bring leadership qualities, doesn’t matter how old I am,” Wright said. “I always try to lead by example. I think this season I earned my teammates’ trust as someone they can look to make right decisions.”

Wright didn’t take long to become comfortable in major junior, and also had a successful appearance at the World Under-17 Hockey Challenge in November, leading all Canadian skaters with four goals and seven points in five games in Medicine Hat, Alta., and Swift Current, Sask.

He had two separate 11-game point streaks with Kingston and exploded for 24 points in 13 games in the month of February to pull away in the rookie scoring race.

Any chance for Wright to pad his statistics was halted when the OHL shut down its season on March 12. Kingston was holding down the eighth and final playoff spot in the Eastern Conference at the time.

“Coming close at the end of the season there with games being more important I felt I needed to step up my game a little bit and I feel our whole team stepped up their game,” Wright said. “It didn’t end the way we wanted it do but we made the playoffs.

“We’re really excited for what we can do next year.”

Peterborough Petes forward Mason McTavish was second in rookie scoring with 29 goals and 42 points in 57 games.