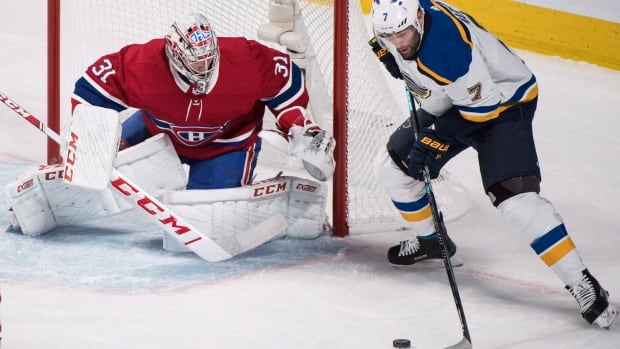 Brendan Gallagher scored with 11 seconds left in regulation as the Montreal Canadiens defeated the St. Louis Blues 3-2 on Wednesday to extend their winning streak to three games.

Max Domi and Mike Reilly each scored their first goal of the season for Montreal (4-1-1). Back between the pipes after missing two games with the flu, Carey Price made 23 saves for his second victory of the season.

Vince Dunn and Brayden Schenn scored for the Blues (1-3-2) while Jake Allen stopped 20-of-23 shots in defeat.

Gallagher scored the winner when he tipped a loose puck past Allen in the dying moments of the game after jumping on a bad giveaway by defenceman Colton Parayko in front of the net.

Montreal honoured Tomas Plekanec in a pre-game ceremony. The 35-year-old Czech native played, and scored, in his 1,000th NHL game on Monday.

The Canadiens, who were coming off home wins against Pittsburgh and Detroit, continued their surprisingly strong start to the season.

Just 39 seconds into the game, Domi put the home team in front with his first goal in a Canadiens uniform. On a 2-on-1 with Jonathan Drouin, the 23-year-old Domi carried the puck from his own blue line before beating Allen with a backhand between the pads.

Dunn evened the score at 3:21 of the second period when his shot from the point beat Price through traffic.

Reilly showed fancy stick work at the blue line to evade Brayden Schenn’s poke check before firing a wrist shot glove side past Allen on the power play at 7:42 of the second to give Montreal the 2-1 lead.

1st win over Blues in 3 years

The Canadiens gave St. Louis three power plays in the third period and the visitors capitalized on the last one. With Matthew Peca in the box for holding, Schenn beat Price with 3:29 left in the game.

The victory was Montreal’s first against the Blues since Oct. 20, 2015. The Canadiens were 0-3-2 in their last five versus St. Louis.

Defenceman Karl Alzner played his first game of the season after being a healthy scratch for the first five.

Claude Julien’s men are well ahead of last year’s pace, when they needed 12 games to earn their first nine points of the season, compared to six games this year.