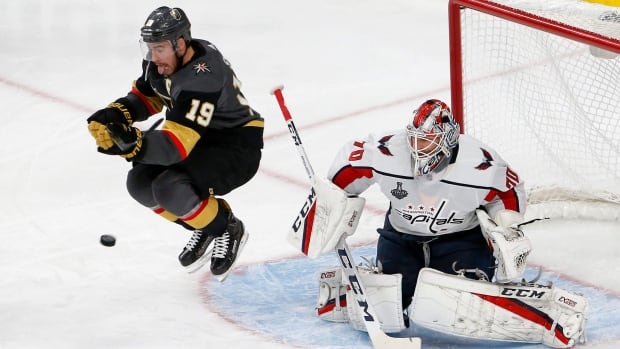 At home, the Vegas Golden Knights have a fortress to protect, a Knight to vanquish opponents and Michael Buffer to introduce the combatants.

On the road, they have hockey.

The Golden Knights are looking for a little road cookin’ as the Stanley Cup Final against the Capitals goes to Washington for Games 3 on Saturday night with the series tied at one game apiece. They’re 6-2 on the road so far in the playoffs.

Vegas is plenty comfortable on home ice, 7-2 even after dropping Game 2 Wednesday. That’s a far cry from the Capitals, who are 4-5 at home.

Road success has been a hallmark of each team’s run to the Final. Vegas won two of three games in a tough building in Winnipeg in the Western Conference final and has built plenty of confidence playing away from home.

“We try and play the same game no matter what game we’re playing at, and it worked really well so far in the post-season,” coach Gerard Gallant said Thursday. “We just try and play the same game — play a quick, fast game, an up-tempo game. Every game’s important in the playoffs, so I really don’t think it matters if you’re playing at home or on the road. Just make sure you’re focused for that game.”

Focus can be hard to keep at an arena on the Las Vegas Strip where the pregame entertainment is the talk of the NHL. The Golden Knights scored the first goal and allowed the next two in each of the first two games this series, which isn’t how they got to this point.

After a 3-2 loss, Golden Knights defenceman Nate Schmidt said the message going to his old hometown of Washington is: “Play more direct. Play to our strengths. Try not to get sucked into the transition game that they want to play.”

His former teammates would be wise to listen. For some reason, the Capitals’ game has been better on the road where they can slow things down and take advantage of odd-man rushes.

Three rounds in, they haven’t quite figured out how to do that at home. But coach Barry Trotz doesn’t think there’s a systemic problem with his team at home.

“I think you try to bring some of the things that you do on the road,” Trotz said. “We’ll get some energy off our crowd and hopefully you want to get the other team on their heels when you’re at home a little bit just as you do on the road. I just think managing the puck is key for us at home. When we do that well, we do it well and we’re pretty effective.”

Gallant concedes that his top line of Marchessault, William Karlsson and Reilly Smith will have to play against whoever Trotz wants because the Capitals get the last line change on the road. That’s one big plus for the Capitals, who might not have top centre Evgeny Kuznetsov after he left Game 3 with an apparent left arm or wrist injury.

“We can get some matchups that we actually prefer,” Trotz said. “It should be fine. We’re very comfortable at home. Our record over the last four years at home was one of the best in the National Hockey League, so I think that’ll get back to where we want it to be.”