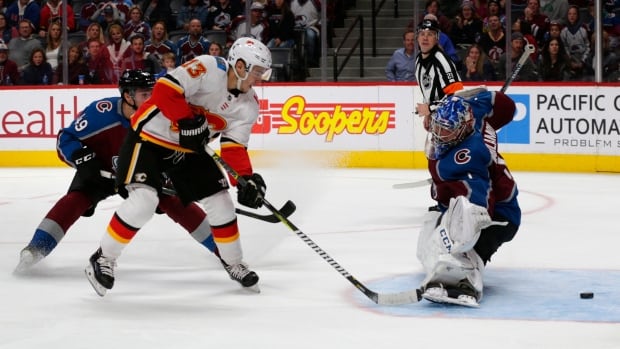 Elias Lindholm scored the tying goal with 1:54 left in regulation and Johnny Gaudreau won it in the first minute overtime as the Calgary Flames beat the Colorado Avalanche 3-2 on Saturday night.

Lindholm sent the game into OT by forcing a turnover in the Colorado zone and taking the puck up close and firing it past goalie Semyon Varlamov for the equalizer.

Colorado, which led 2-0 after the first period, couldn’t stop Gaudreau on a breakaway. He got behind the Avalanche defence and knocked home the game-winner from up close.

Calgary broke through for its first a goal at 10:52 of the second to pull to within 2-1. Varlamov stopped a shot from Mikael Backlund but the puck popped loose in front of the net. Sam Bennett charged through the slot and got his stick on the puck, shoving it into the net for the score.

Colorado broke on top with two quick goals in the first period, the first coming 11 seconds into the game. Gabriel Landeskog won the game-opening faceoff and sent the puck into the Calgary zone. Mikko Rantanen sent a shot to the net that goalie David Rittich saved but he couldn’t corral the rebound, which found Nathan MacKinnon’s stick. MacKinnon wristed the puck into the net for his sixth goal of the season. The goal by MacKinnon equalled the franchise record for most consecutive games with a goal to start a season set by Mats Sundin in 1992-93

J.T. Compher capitalized on a Calgary turnover to score Colorado’s second goal at 2:40 of the first. Defenceman T.J. Brodie lost a puck in the Calgary zone when it bounced over his stick and Compher swept in to carry the puck down the ice before knocking it into the net up high for the score.