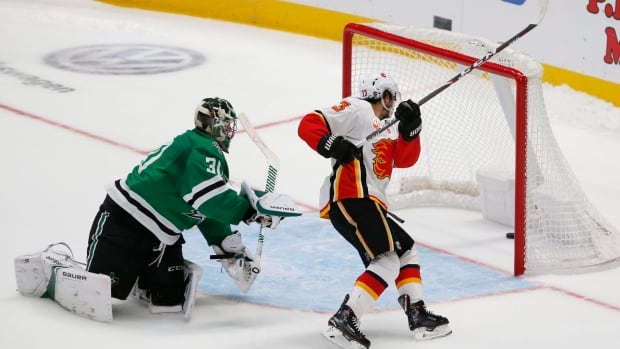 Johnny Gaudreau put a backhand past Dallas goalie Ben Bishop in a shootout and the Calgary Flames beat the Stars 3-2 on Thursday night.

Tyler Seguin was the only one of three Stars who beat Calgary goalie David Rittich in the shootout. It was tied 1-1, with Sean Monahan beating Bishop before Gaudreau won the game on the last attempt in the first round.

Rittich had 34 saves, including the stop of a penalty shot awarded to Alexander Radulov with 21 seconds remaining in overtime.

The Flames erased a 2-0 deficit in the third on goals by Elias Lindholm and Noah Hanifin.

Radek Faksa set up the first goal by sending the puck across the ice to Hanley low in the left faceoff circle. He sent the puck to the slot, where L’Esperance redirected it past Rittich at 16:39.

L’Esperance and Hanley began the season with Texas of the AHL. L’Esperance’s goal was his third in the NHL and first of the season. Hanley’s seventh career assist was his first NHL point since April 2, 2016, with Montreal.

Hanley was playing in his first game for Dallas this season; L’Esperance scored in his second game back with the Stars.

Calgary had lost its previous six games to Dallas since December 2016.

The Stars had the only power play in the scoreless first period but didn’t put a shot on goal with the advantage.

Dallas outshot the Flames 16-9 in the second period, including seven shots on goal during three more power plays.

The Stars won the third-period faceoff. Benn skated down the slot and took a pass in front to beat Rittich for his first goal of the season. Dallas had started the season 0 for 13 on the power play.

Calgary scored 1:29 later on its first power play on Lindholm’s shot from just inside the blue line. Hanifin tied the game at 2 at 5:32, trailing a 2-on-1 rush and taking a pass back in the slot from Mikael Backlund.