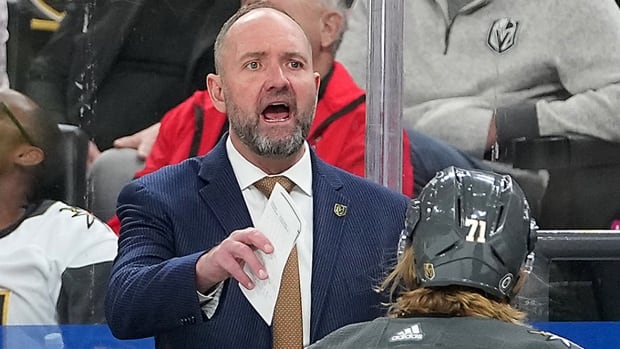 The Vegas Golden Knights have fired head coach Peter DeBoer after they missed the playoffs for the first time in franchise history.

General manager Kelly McCrimmon made the announcement Monday and thanked DeBoer for his work with the organization.

“Since joining the organization, Pete and his staff have guided us through some of the most unique and challenging circumstances we’ve witnessed since our franchise entered the NHL,” McCrimmon said. “After lengthy discussions over the last two weeks, we believe that a new coach will put us in the best position to succeed next season.”

Vegas failed to qualify for the playoffs after a barrage of injuries compounded by salary cap problems wreaked havoc on the lineup, most notably in goal. The Golden Knights at one point were first in the Pacific Division but after 82 games found themselves three points back of the final wild-card spot in the Western Conference despite acquiring centre Jack Eichel in a trade with Buffalo and other moves along the way designed to make them a perennial championship contender.

The organization having a short leash on head coaches is nothing new. DeBoer coached the Golden Knights for 2 1/2 seasons after being named in January 2020 to replace Gerard Gallant, who guided the team to the Stanley Cup final in their inaugural season in 2017-18 and back to the playoffs in 2019.

Under DeBoer, they reached the playoffs the previous two years and lost one round before the Stanley Cup final each time.

Vegas joins the list of vacancies, which also includes Winnipeg and Chicago — teams that are not expected to bring back interim coaches.

DeBoer was coaching his fourth NHL team after stints with Florida, New Jersey and San Jose. He took

General manager Lou Lamoriello announced Lambert as Trotz’s replacement a week after firing the Stanley Cup-winning coach who had one year left on his contract.

It’s Lambert’s first head coaching job in the NHL. Trotz was fired last week after the Islanders missed the playoffs for the first time in his four seasons behind the bench, a disappointing turn of events chalked up significantly to opening with a 13-game road trip and getting hit with a string of coronavirus absences and injuries.

Lamoriello declined to say why he fired Trotz other than he felt the team needed a new voice. He and Lambert are expected to address reporters later Monday.

Lambert, 57, has worked on Trotz’s staff the past 11 years with Nashville, Washington and New York. He has a Stanley Cup ring from the Capitals’ title run in 2018, after which Trotz resigned and joined the Islanders.

Trotz was also replaced by an assistant then, when Todd Reirden was elevated to take over in Washington. He was fired after two seasons and two first-round playoff exits.

Reirden, who is now on Mike Sullivan’s staff with the Pittsburgh Penguins, did not have a prior relationship with Trotz. Lambert began working under Trotz with the Nashville Predators in 2011 after four seasons as coach of their American Hockey League affiliate in Milwaukee and has been by his side since.

It was not immediately clear what would happen to assistants Jim Hiller and John Gruden and goaltending coach Piero Greco, who all remained under contract when Trotz was fired, according to Lamoriello. The 79-year-old executive said those decisions would be made by the next coach.

That’s Lambert, a native of Swift Current, Saskatchewan, who played in 300 NHL regular-season and playoff games in the 1980s and many more in the minors and Europe after that. He went almost immediately into coaching in 2002 as an assistant with Moose Jaw of the Western Hockey League.

Lambert stayed in the junior league, coaching Prince George for two seasons before making the leap to the AHL. Next season will be his 22nd in coaching at any level and seventh as a head coach.