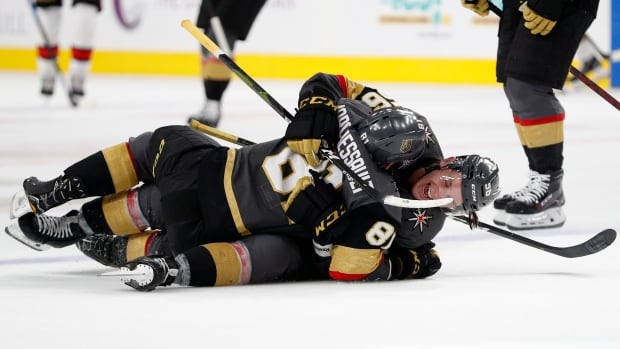 Jonathan Marchessault scored on a penalty shot in overtime to lift the Vegas Golden Knights to a 4-3 victory over the Ottawa Senators on Sunday night.

Alex Tuch scored two goals and Ryan Reaves added his third of the season for Vegas, while Marc-Andre Fleury made 19 saves.

Marchessault earned the penalty shot after being interfered with on a breakaway, and then beat Ottawa goalie Craig Anderson with his first career penalty shot.

Matt Duchene, Bobby Ryan and Ryan Dzingel scored for the Senators, while Anderson made 49 saves.

Duchene gave the Senators an early 1-0 lead when he found a loose puck in traffic in front of the net and snapped it top shelf with a shot Fleury saw coming, but clearly misread.

Ryan extended Ottawa’s lead when he was perfectly positioned to find Mark Stone’s pass off the end board. He punched it into a wide open net for a power play goal.

It was the Senators’ first road power-play goal. They are 1-for-9 with a man advantage in road games.

Tuch, who missed the first eight games of the season with a lower-body injury, notched his first goal of the season when he went the length of the ice, skated around Duchene, then went forehand-backhand to deke Anderson and cut Ottawa’s lead in half.

Reaves, who arrived in Las Vegas last February with the reputation as being an enforcer and bully on the ice, scored his first career power-play goal when he tied the game with 1:39 left in the second period.

Vegas was 1 for 5 with an extra man, and is now 4 for 37 on power-play opportunities this season.

Playing a nifty passing game of tic-tac-toe, Dzingel was the beneficiary as he scored his team-leading fourth road goal of the season to put Ottawa back on top. The lead didn’t last long, though, as Tuch scored his second goal 28 seconds later.