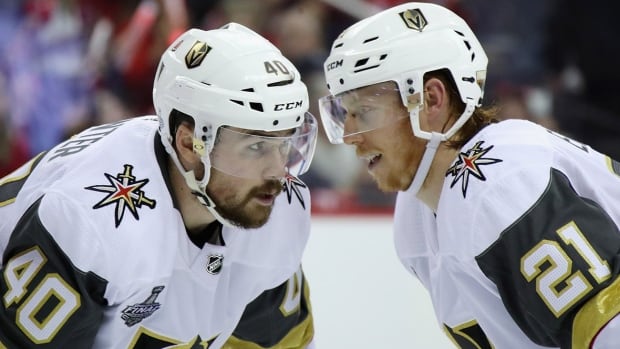 The Vegas Golden Knights have long embraced their status as unheralded underdogs, from their very first game as an NHL expansion team in October through their stunning dismantling of Winnipeg in the Western Conference Final.

“We call ourselves the Golden Misfits for a reason,” winger Ryan Reaves said prior to the Stanley Cup Final series against Washington. “We’ve proven everyone else wrong all season.”

Vegas entered the Final as favourites over the Capitals, who broke into the league in 1974 and are still in search of their first championship. The Golden Knights won the opener, but after dropping two in a row they find themselves playing a familiar role as they prepare for Game 4 on Monday night.

“We’re still underdogs,” left wing David Perron said. “They’re a great team over there. Now the pressure is on them to keep going. We’re going to find a way to answer.”

The Capitals got caught up in a fast-paced, fire-at-will contest in Game 1, and Vegas rolled to a 6-4 victory. Washington made the adjustment in Game 2 and won 3-2, then gripped the defensive clamp even tighter Saturday night in a 3-1 win.

Now, mired in their initial losing streak of the playoffs and trailing 2-1 in games for the first time, the Golden Knights are desperate to become more effective pushing the puck toward the net.

“We get it out on our blue line and we try to make a cross-ice play and they’re picking it off,” Reaves said. “Their transition game is good. We’re getting to their blue line and we’re trying get cute again instead of doing what works. With this team, that’s getting it in and then going to work.”

The Capitals know this, and they have taken great strides to shackle a team that averaged 3.31 goals per game during the regular season, tied for fourth in the NHL.

“Offensive teams have certain tendencies, certain routes that they take through the neutral zone, plays they like to make,” Washington defenceman Matt Niskanen said. “So if you can be on top of them and turn over some pucks, stifle them, make it hard for them to gain entry with possession, that frustrates skilled players.”

The Golden Knights mustered only 22 shots on goal in Game 3, with Tomas Nosek getting the lone score after Washington goaltender Braden Holtby did a miserable job of clearing the puck from behind his net.

That’s what Sunday’s skate was about. The Golden Knights understand the problem, and the task now is to correct the shortcoming.

“We’ve just got to get back to our game, getting pucks deep and getting in on the forecheck,” defenceman Derek Engelland said. “It’s been our key all season long, the five-man forecheck and five-guy pressure all over the ice.”

Vegas doesn’t need a high-scoring, freestyle affair to win. The Golden Knights have a pair of 1-0 shutouts during the playoffs and have won twice when scoring only two goals.

The key is to cut down on the mistakes. Golden Knights goaltender Marc-Andre Fleury stopped Alex Ovechkin at the end of a 2-on-1 rush early in the game, but the Capitals converted an odd-man blitz in the second period for a 2-0 lead.

“Working hard to get down low, we just couldn’t hold onto it or make a big play, and the Capitals are going the other way,” Vegas center Ryan Carpenter said.

It’s not by accident. Washington coach Barry Trotz changed things up after Game 1, and the results were profound.

“There are things that they do that have given us some difficulties, and we’ve adjusted,” Trotz said. “They’ll do the same.”

The Capitals have fortified their defence, and Vegas now must find a way to penetrate the barrier. If it can do that, then Fleury will happily do his part in to help bring the series back to Las Vegas tied a two games apiece.

“I have faith in these guys that they can do well, they can do what they’ve done for the past three rounds and all season long,” the goaltender said.

What they’ve done, more often than not, is win when few thought they could.

“We’ve been in situations like this before: adversity, have our backs against the wall a bit,” defenceman Luca Sbisa said. “The belief in our group is still here. Just got to stick together.”