Marc-André Fleury had a rare off evening in his remarkable playoff run with the extraordinary expansion Vegas Golden Knights.

But Fleury’s struggles didn’t matter because the Golden Knights’ fourth line, which includes a Frenchman (Pierre-Édouard Bellemare), a Czech (Tomas Nosek) and a Canadian (Ryan Reaves), rode to the rescue.

They played so well that cameras caught Reaves singing along perfectly to Cab Calloway’s Minnie the Moocher while sitting on the bench late in the game.

Down a goal early in the third period, Reaves and Nosek scored to give the Golden Knights the lead for good.

Then Nosek added an empty-netter in Vegas’ 6-4 victory in what was a sloppy but wild back-and-forth Stanley Cup Final curtain raiser on Monday.

Vegas head coach Gerard Gallant hasn’t been bashful about giving the Bellemare-Nosek-Reaves unit their share of shifts, and that faith paid dividends on an evening that began with boxing ring announcer Michael “Let’s Get Ready to Rumble” Buffer performing the introductions.

Only in Vegas, right?

Gallant employs his fourth line for key face-offs in the defensive zone. Bellemare and Nosek are important penalty killers.

The Winnipeg-born Reaves scored the game-winner and series-clincher in Game 5 of the West final between Vegas and the Winnipeg Jets eight days ago. In the West final, on several occasions, the Golden Knights had an ability to respond with goals shortly after the Jets scored.

That happened again in the opener against Washington. Capitals first-line right wing Tom Wilson put his team ahead 4-3 just 70 seconds into the third period.

Reaves, however, responded with an unassisted goal that was the result of some hard work from Nosek behind the net. 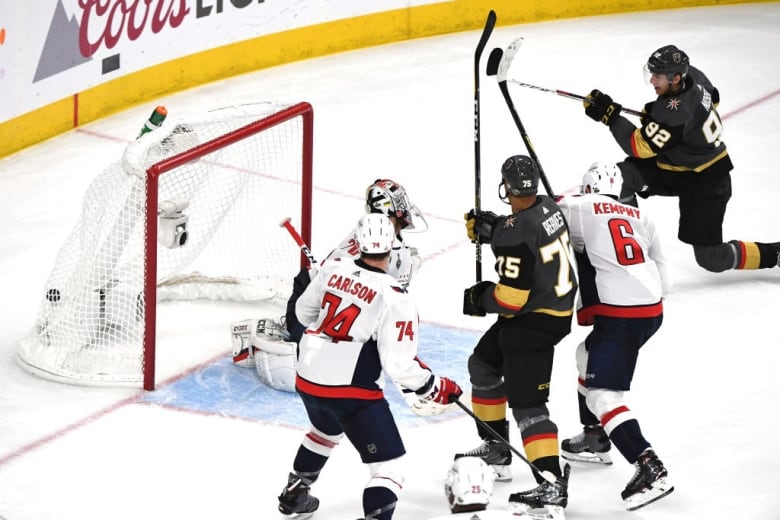 Vegas wasn’t out of the woods just yet, though.

Washington centre Lars Eller had an open net, but Golden Knights defenceman Brayden McNabb hustled to hammer Eller’s stick with perfect timing to keep him from tying the game for the fifth time.

A bit of controversy

The opener did have some controversy. Shortly after Reaves tied the game, Wilson caught Vegas forward Jonathan Marchessault with a late blindside hit.

Initially, referees Marc Joannette and Wes McCauley missed the play. But after conferring with linesmen Matt MacPherson and Jonny Murray, they called Wilson for a two-minute interference penalty. He went off with Golden Knights forward David Perron, who came off the bench to cross-check Alex Ovechkin moments after the Wilson hit.

Marchessault spent time in the concussion quiet room but was allowed to return. He said he’ll leave it to the league to make any further decisions regarding Wilson, who was suspended for three games in the second round for a head shot against Pittsburgh Penguins rookie Zach Aston-Reese.

Wilson, meanwhile, didn’t feel he delivered a dirty hit on Marchessault. “He looked fine in the end,” Wilson said. “He was yelling at me from the bench. I believe it was a good, clean hit.”

Capitals goalie Braden Holtby was on a pretty good roll entering the championship series, having blanked the Tampa Bay Lightning in the final two games of the East final.

But his shutout streak was halted at 166 minutes and 42 seconds when Vegas defenceman Colin Miller scored on a screenshot early in the first period to open the scoring. 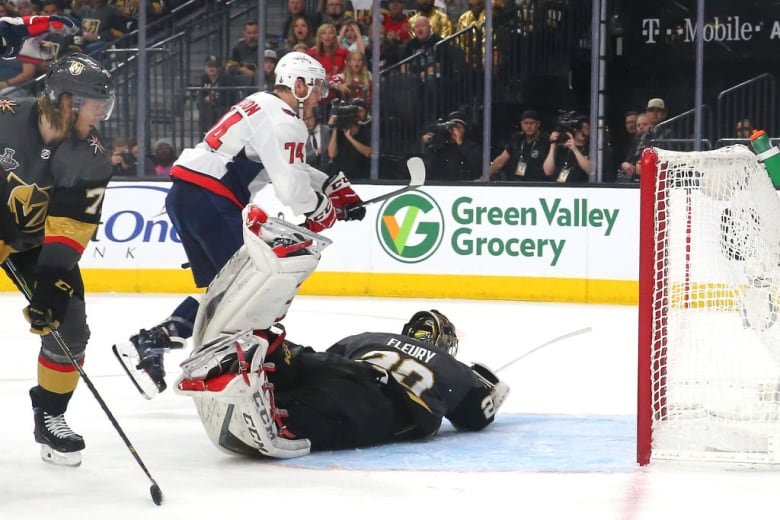 It’s the 12th time in 16 playoff games this spring that the Golden Knights scored first.

Holtby allowed five goals on 33 shots, but his defence didn’t have an answer for how diligent the Golden Knights were around the Washington goal.

Fleury may not have another game like this one, so Holtby and the Capitals’ team defence better find their response or this could be a short series.