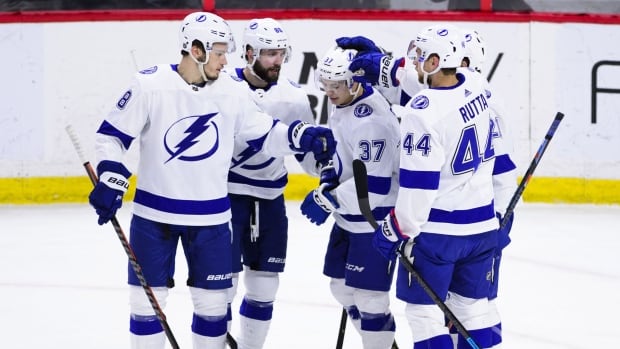 Yanni Gourde had two goals and an assist as the Tampa Bay Lightning won its 60th game of the season with a 5-2 victory over the Ottawa Senators Monday night.

The Lightning, who play their final four games on the road, are just the third team in NHL history to win 60 games in a season.

Brady Tkachuk and Max Veronneau scored for the Senators (28-45-6). Craig Anderson, playing in his 400th career game with the Senators, stopped 21 shots.

Trailing 3-1 the Senators made it a one-goal game as Veronneau scored his second career goal in tight on Vasilevskiy, but less than a minute later the Lightning regained their two-goal lead with Gourde scoring his second of the night on a breakaway.

Stamkos made it 5-2 with under three minutes remaining in regulation.

The Lightning jumped out to a 3-1 second-period lead after a slow start to the game.

Sergachev made it 2-1 midway through the period with a shot from just inside the blueline with Anderson screened, while Point made it 3-1 with his 41st of the season. Gourde made a behind-the-back pass to Point, who was left all alone out front.

The Lightning opened the scoring at the 12-minute mark as Kucherov saw Gourde at the side of the net and he tapped it into the open net.

Ottawa tied the game late in the period as Tkachuk beat Vasilevskiy through the legs. With his 21st of the season, Tkachuk set a new franchise record for goals by a teenager.