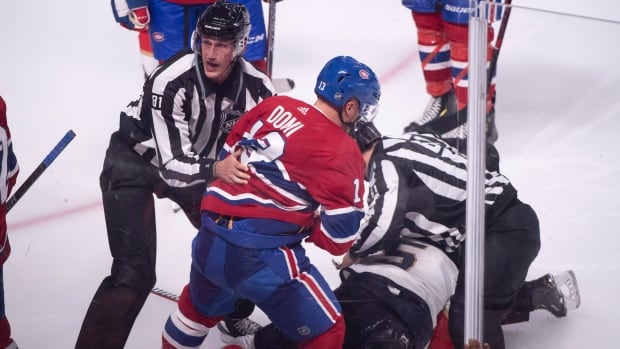 Montreal Canadiens forward Max Domi says he regrets punching Florida Panthers defenceman Aaron Ekblad in an incident that cost him a suspension for the remainder of the NHL pre-season.

“I feel bad about it.” Domi said at practice Friday.

“It’s not the way I wanted to handle that. It’s an emotional game. Obviously, I’m an emotional player. But, you know what, I got to suffer the consequences of it. It’s unfortunate, but it is what it is and I definitely respect the league’s decision.

“I’ve known Aaron for a long time. Grew up playing against each other. We always play hard, always battle, whether it was in minor hockey, junior, the national level, and now the NHL, too. By no means did I want to hurt him. I feel bad about it and I hope he’s OK.”

The punch came at the start of the third period of Wednesday’s pre-season game. Domi began tugging on Ekblad’s shirt, asking him to fight. With the Panthers star showing no interest in dropping the gloves, Domi punched him in the face twice, but still Ekblad didn’t respond.

Domi then dropped his right glove and sucker-punched him right on the nose, and the bloodied Ekblad dropped to the ice. Domi was given a minor, major and match penalty on the play.

Domi said he thought he and Ekblad were both going to drop their gloves.

Domi was making his first appearance as a Canadien after coming to Montreal in an off-season trade that sent Alex Galchenyuk to Arizona.