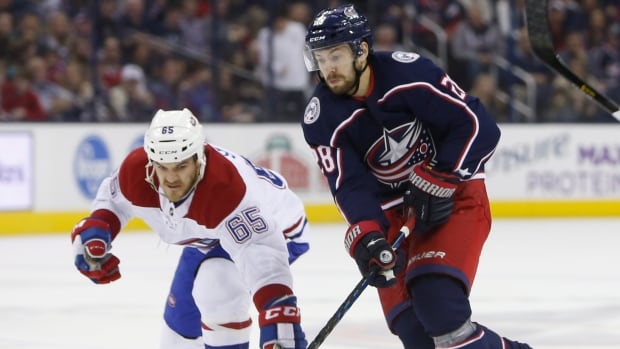 Oliver Bjorkstrand scored twice, Sergei Bobrovsky had 28 saves and the Columbus Blue Jackets moved into an Eastern Division wild-card spot with a 6-2 win over the Montreal Canadiens on Thursday night.

The Blue Jackets, winners of three straight, moved into a tie with Montreal for the second wild card and they hold the tie-breaker with five games remaining. Carolina, which lost to Washington on Thursday, is one point ahead in the first slot.

Brett Kulak had a goal and an assist, and Jeff Petry also scored for Montreal, which was 4-0-1 in the last five before the Columbus trip. Carey Price finished with 24 saves.

For the first 10 minutes of the game, the Blue Jackets didn’t look like a team hungry to make the playoffs. They were unable to muster a shot, or even a decent attempt.

Meanwhile, Kulak snapped in a shot from the point 1:15 in, the first goal against Bobrovsky in three games.

Bjorkstrand’s redirection of a shot by Seth Jones knotted the game again. Columbus took the lead to stay 5:36 into the second when Panarin scored on a one-timer from the left circle off a splendid cross-ice pass from Matt Duchene.

Nash got his first goal in 49 games early in the third period when he got a breakaway and put back his own rebound. Bjorkstrand got his second goal of the night when Dean Kukan got loose with the puck and fed him in front of the Montreal net. Dubinsky added an empty-netter with 3:11 left.