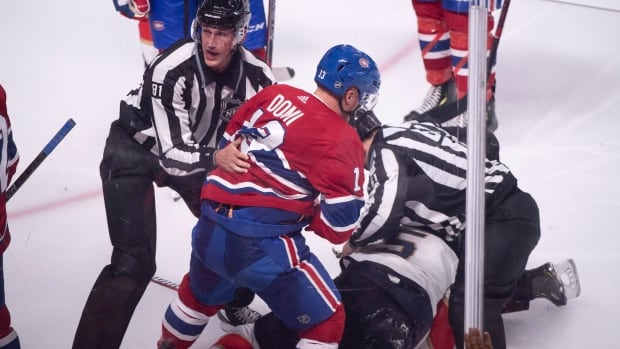 Montreal Canadiens forward Max Domi has been suspended for the remainder of the NHL pre-season after punching Florida defenceman Aaron Ekblad during an exhibition game.

The NHL’s Department of Player Safety made the announcement Thursday following an afternoon hearing with Domi.

The punch came at the start of the third period of Wednesday’s pre-season game. Domi began tugging on Ekblad’s shirt, asking him to fight. With the Panthers star showing no interest to drop the gloves, Domi punched him in the face twice, but still Ekblad didn’t respond.

Watch video of the fight:

Domi then dropped his right glove and sucker punched him right on the nose, and the bloodied Ekblad dropped to the ice. Domi was given a minor, major and match penalty on the play.

Domi, who was making his first appearance as a Canadien after coming to Montreal in an off-season trade that sent Alex Galchenyuk to Arizona, met with the NHL’s Department of Player Safety on Thursday.