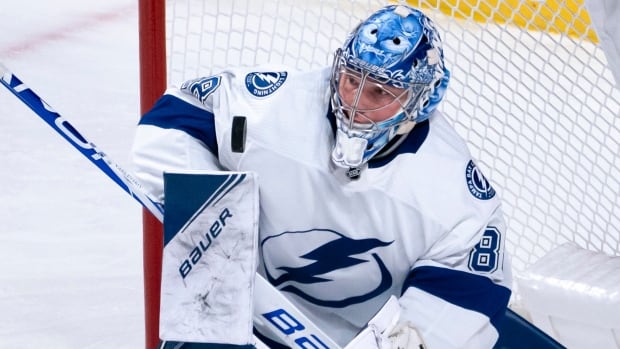 Andrei Vasilevskiy made 33 saves as the visiting Tampa Bay Lightning defeated the Montreal Canadiens 3-1 on Tuesday night in the fifth game of a six-game road trip.

Braydon Coburn, Steven Stamkos and Tyler Johnson scored for the Lightning (3-2-1), who were coming off a 4-2 loss to the Ottawa Senators. Nikita Kucherov added two assists.

The 25-year-old Vasilevskiy improved to 8-1-2 in his career against Montreal.

Jeff Petry scored the lone goal for the Canadiens (2-2-2) while Carey Price stopped 19-of-22 shots in defeat.

Montreal made no changes to the lineup that downed the defending Stanley Cup champion St. Louis Blues 6-3 on Saturday night at Bell Centre. Rookie defenceman Cale Fleury was a healthy scratch for the fourth straight game.

The Canadiens came into the matchup with the league’s fourth-best offence, scoring four goals per game, but they could not solve Vasilevskiy more than once.

Montreal struck first when Petry’s one-timer on the power play blew past last year’s Vezina Trophy winner at 15:46 of the first period. The home team finished 1 for 5 with the man advantage.

Claude Julien’s squad nearly took that 1-0 lead into the first intermission but intense pressure by Tampa Bay led to the equalizer with seven seconds to play. Coburn beat Price over the shoulder to end a two-minute shift as the Canadiens were unable to clear their zone.

The Lightning rode that momentum into the second period, scoring twice in a 57-second span.

Stamkos gave Tampa a 2-1 lead at 1:04 with a one-timer from the face-off dot on the power play, moments after Artturi Lehkonen hit the post at the other end.

Montreal’s 28th-ranked penalty killing continues to surrender goals — the one conceded to Stamkos was the seventh in six games this season.

Ryan McDonagh caught the Canadiens on a slow line change with a stretch pass that led to Johnson’s 3-1 goal at 2:01. The Lightning scored three times on their first 10 shots on Price.

Montreal came out strong in the third period but Vasilevskiy turned away every offensive wave for his third win of the season.