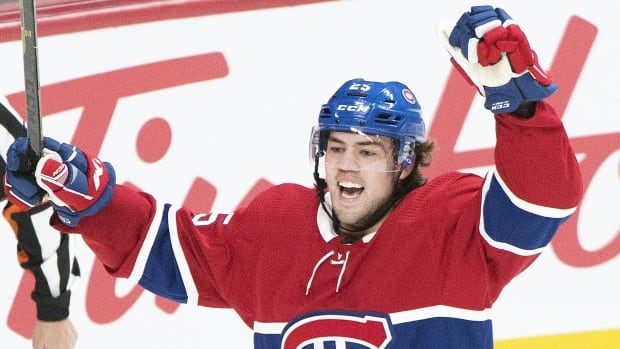 Ryan Poehling notched a hat trick and then added the shootout winner in his NHL debut as the Montreal Canadiens beat the Toronto Maple Leafs 6-5 in the season finale for both teams on Saturday.

Jordan Weal and Andrew Shaw also scored for the Canadiens (44-30-8), who were eliminated from playoff contention on Friday night.

Goalie Charlie Lindgren, in his first game of the season, stopped 44-of-49 shots. Lindgren filled in for Carey Price, who had started the previous 13 games.

Zach Hyman, Jake Gardiner, Trevor Moore, William Nylander and Kasperi Kapanen scored for the Maple Leafs (46-28-8), who will face the Boston Bruins in the first round of the playoffs. Frederik Andersen also stopped 44-of-49 shots.

The shots were 49-49 after overtime — a new Canadiens record for combined shots in a game.

Montreal became the last team eliminated from playoff contention on Friday when the Columbus Blue Jackets beat the New York Rangers 3-2 in a shootout. The Canadiens have missed the playoffs in back-to-back seasons for the first time since 2001.

Toronto jumped to a 2-0 lead in the first period. Hyman’s no-look shot went off Shea Weber’s skate and in at 5:50 before Gardiner’s shot from the point was deflected by Brendan Gallagher at 8:03.

Poehling scored his first NHL goal on his fourth career shift at 11:41 by going hard to the net and ramming the puck past Andersen.

The native of Lakeville, Minn., netted his second of the game to make it 2-2, an easy tap-in at 2:56 of the second period.

Poehling, who signed three-year entry-level deal last Sunday, became the fifth Canadiens player in franchise history to score at least two goals in his NHL debut. He’s the first to do it since John Ferguson in 1963, and the first to score a hat trick since Alex Smart in 1943.

Montreal grabbed its first lead of the game when Weal scored a power-play goal at 7:04 of the second.

The visitors tied it up less than two minutes later on Moore’s second of the season on a partial breakaway.

Shaw gave the Canadiens a 4-3 lead when he completed a give-and-go with Max Domi and Artturi Lehkonen at 10:17.

Nylander made it 4-4 at 17:33 of the second on a wraparound after Lindgren overcommitted to his left.

With 11:56 left to play in a 4-4 game, the Leafs broke the deadlock when Auston Matthews found Kapanen alone in the slot for the winner.

With an eye on the playoffs, Toronto rested four of its top defencemen: Ron Hainsey, Jake Muzzin, Nikita Zaitsev and Travis Dermott.