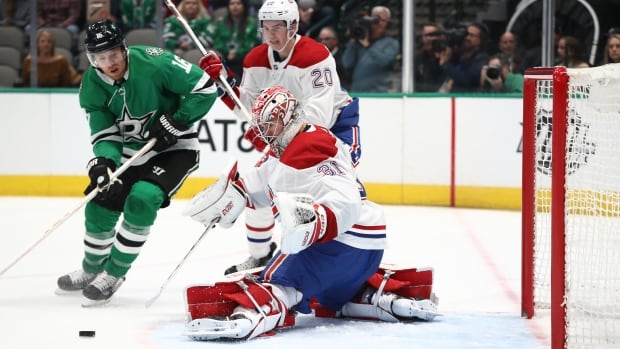 Denis Gurianov scored two goals, one on a penalty shot, and Ben Bishop made 35 saves to lead the Dallas Stars past the Montreal Canadiens 4-1 on Saturday night.

As Gurianov skated in on Canadiens goalie Carey Price on a breakaway, Nick Suzuki was called for slashing at 18:49 of the second period. After the stoppage, Gurianov slid the puck between Price’s legs.

Gurianov also added the Stars’ second power-play goal of the game, his fourth goal this season and fifth of his NHL career.

Alexander Radulov scored in the first period and Miro Heiskanen added an empty-netter for Dallas, which has won six of seven.

Montreal’s loss ended a three-game winning streak. Artturi Lehkonen scored for the Canadiens with 3:42 to play, and Price stopped 36 shots.

Radulov scored at 15:24 of the first, a second after the Stars’ second power play of the period began. Tyler Seguin won the draw in the left circle, with the puck going back to Radulov high in the slot. His shot went in off Price’s glove.

Montreal had the first six shots on goal, but Dallas came back for a 14-13 advantage in the first period. The Stars killed off all three of their penalties, two by Radulov.

Montreal finished 0 for 5 on the power play. The Canadiens are 1 for 15 in their last five games.

In the second period, Price made the most difficult saves. He stopped close-in shots by Blake Comeau and Seguin early on, then withstood a barrage of five shots in 13 seconds by Gurianov and Joe Pavelski with 3 1/2 minutes remaining.

The Canadiens’ best chance came on the only power play of the period, when Bishop made a glove save of Jonathan Drouin’s wrist shot from the left circle.

Bishop was removed from his previous start Tuesday after allowing two goals in the first period.