An aspiring NHL forward sits quietly as his future bosses praise his work during the team’s training camp, understanding he’ll soon be sharing the ice with those he knows well back in the Ontario Hockey League.

Montreal Canadiens general manager Marc Bergevin and head coach Claude Julien tell the 13th overall pick from the 2017 NHL draft he’s close to being a regular in the league. The 19-year-old player, his confidence soaring, also believes he’s on the cusp of NHL employment. But there’s work to be done.

“They want me to play at a higher pace,” says Nick Suzuki, the key return for the Canadiens in the Sept. 9 trade that sent captain Max Pacioretty to the Vegas Golden Knights, who visit the Bell Centre in Montreal on Saturday night. “I got used to playing at an NHL pace [at camp] and I have to play a step ahead of everybody [in junior] and try my best to dominate every game.”

Former Toronto Maple Leafs defenceman Todd Gill, in his second season coaching Suzuki with the Owen Sound Attack, points out the team’s first-year captain only needs to be told things once.

This guy’s got it all — the hockey sense, an NHL shot, he sees the ice very well and can pass the puck with the best of them.— Attack head coach Todd Gill on forward Nick Suzuki

In his OHL return, Suzuki didn’t register a point and had a minus-3 rating, but rebounded the next night with a hat trick against the top-ranked Ottawa 67s before adding three assists versus Sarnia four days later.

The native of London, Ont., has points in all but three of 13 games since, recording 13 goals, 25 points and a plus-9 rating across 16 contests, putting Suzuki on track for a second consecutive 100-point season.

“This guy’s got it all — the hockey sense, an NHL shot, he sees the ice very well and can pass the puck with the best of them,” says Gill, who played 1,007 NHL regular-season games. “But the No. 1 thing with Nick this season is his pace of play has really improved.”

Earlier in his career, Suzuki says, he didn’t move his feet while reading the play but is learning to reach loose pucks and opposing players quicker.

“He wasn’t quite there to take on a big role at a world-level tourney,” says Letowski, the former NHL forward who won’t be part of new head coach Tim Hunter’s staff when the world juniors begins Dec. 26 in Vancouver and Victoria. “Nick is such a smart player, kind of deceptive and one of those guys that can make an impact every time he’s on the ice, but he just wasn’t quite able to create like he had in the OHL. I would guess he’s ready now to do that.”

A late cut of Team Canada, the five-foot-11, 200-plus-pound Suzuki is hoping to catch the eye of Hunter, who takes over from Dominique Ducharme, now an assistant to Julien in Montreal. His audition begins in earnest Thursday night in Sarnia, Ont., when Suzuki will captain Team OHL against the Russian national junior squad as part of the Canada Russia Series.

“I try to get to where the puck’s going to be before it’s there,” says Suzuki, who was further motivated to reach the NHL while watching Vegas’ run to the Stanley Cup Final from the press box. “I think I’ve always been good at reading the play and using my hockey IQ to break up plays.” 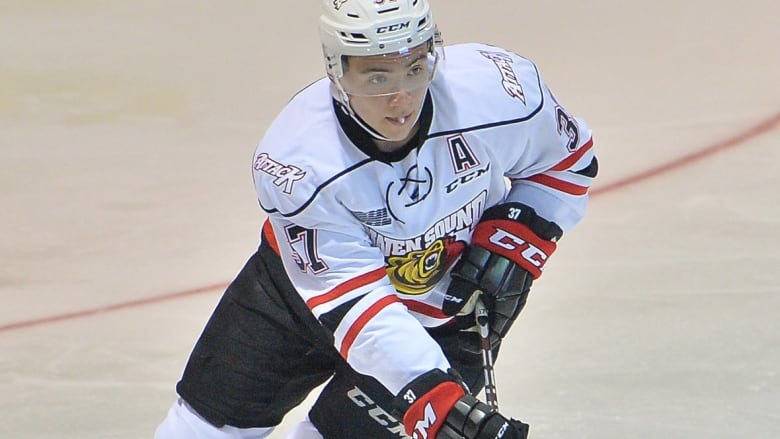 Attack forward Nick Suzuki is 11th in OHL scoring this season with 25 points on 13 goals and 12 assists in 16 games, putting him on track for a second consecutive 100-point campaign. (Submitted by Terry Wilson/OHL Images)

Overage defenceman Sean Durzi, who joined Suzuki in representing Owen Sound at a Canada-Russia Series game in Sudbury last year, believes his teammate has taken his game to another level this season.

“His ability to do the small things that not a lot of people notice, like creating time and space for other players, is next-level stuff,” says Durzi, who lives with the same billet family as Suzuki.

A natural centre who has mostly played on the wing the past two seasons, Suzuki believes he not only was born with an elite hockey sense but feels he has studied the game and viewed it differently than others his age.

Since childhood, he has admired the play of Pittsburgh Penguins captain Sidney Crosby and wears No. 37 because he models his game after Boston’s Patrice Bergeron.

“I think he’s one of the best players in the NHL at stealing pucks from guys, lifting their sticks and turning defence into offence,” Suzuki says of the Bruins centre. “Crosby, just the way he protects the puck low [in the offensive zone]. He’s probably the best in the NHL using his body to shield the puck in the corner.”

In Owen Sound, Gill counts Suzuki among the best at lifting the sticks of opposing players and retrieving pucks on a back check.

‘Sometimes he creates things that aren’t even there’

He has also tried learning the moves of NHL star Connor McDavid, concentrating on the Edmonton Oilers forward as he skates down the wing at top speed.

“You see Connor fly with the puck and still do amazing things,” said Durzi, “and I think Nick has brought that aspect to his game. The way he’s able to make a great play or pass when he’s flying down the wing or through the middle [of the ice] is second to none in the league right now.

“Sometimes he creates things that aren’t even there and to have that IQ is what’s going to make you an elite player in this league and even at the next level.”

Suzuki and the Attack will be hosting Erie on Saturday at the same time Pacioretty attempts to erase a poor start with Vegas — slowed somewhat by injury — that has seen the five-time 30-goal scorer find the net just twice in his first 11 games after signing a four-year, $28-million US deal with the Golden Knights.

Gill continues to stress to Suzuki the importance of being Owen Sound’s best player, most effective defensive forward and top forward every game. For the most part, the 23rd captain in Attack history has responded.

“The No. 1 job in the NHL is consistency,” says the coach. “That will get you to the next level. Nick wants to be a leader, the go-to guy.

“Off the ice, he’s an incredibly grounded person. He’s almost a Bob Gainey-type captain where he leads by example on the ice and when he does talk in the dressing room, the players understand they should listen.”