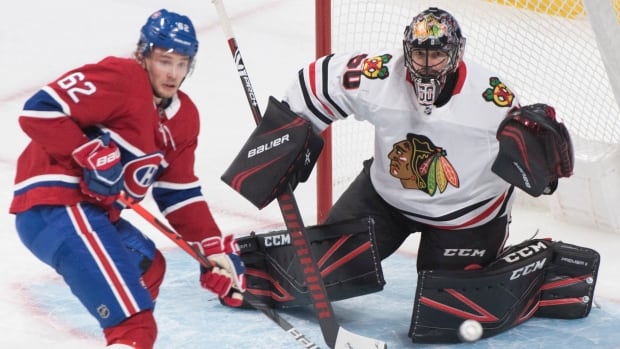 Zack Smith scored twice to give the visiting Chicago Blackhawks a 4-1 victory over the Montreal Canadiens on Wednesday night.

Alex DeBrincat and Drake Caggiula also scored for the Blackhawks (22-20-6), who were coming off a 3-2 overtime win against the Senators on Tuesday. Corey Crawford improved to 11-2-2 against his hometown team with a 32-save effort.

Phillip Danault scored the lone goal for the Canadiens (20-21-7), who have lost 10 of their last 11. Still looking for his first victory of the season, Charlie Lindgren stopped 24-of-28 shots.

Lindgren started the first game of a back-to-back for Montreal. Carey Price gets the nod Thursday in Philadelphia.

The Blackhawks scored twice in a fast-paced first period before Montreal even managed its second shot on net.

Miscommunication between Lindgren and Tomas Tatar behind the net led to Smith’s short-handed goal at 5:42. Lindgren hesitated with the puck and Tatar knocked into him, giving Caggiula the chance to feed Smith in front.

Smith came into the contest with two goals in 40 games all season. The former Senators forward doubled his tally after four shifts.

Lindgren kept Montreal in the game with a desperation save on rookie Dominik Kubalik late in the first to keep it 2-0.

Goals have been tough to come by for the Canadiens lately but they got one 54 seconds after the restart. A no-look pass from Ilya Kovalchuk into the slot fooled Jonathan Toews and Danault scored beneath Crawford’s glove to make it 2-1.

Max Domi’s roughing penalty on Matthew Highmore midway through the second proved costly for Montreal when DeBrincat’s power-play goal at 11:27 restored Chicago’s two-goal lead. After Lindgren lost his blocker in a goal-mouth scramble, DeBrincat scored on a one-timer from Patrick Kane.

Domi was benched for the remainder of the second as punishment for the penalty.

Caggiula put the game to bed with 8:20 remaining in the third after stripping Jordal Weal of the puck in the neutral zone and beating Lindgren glove side on the breakaway.