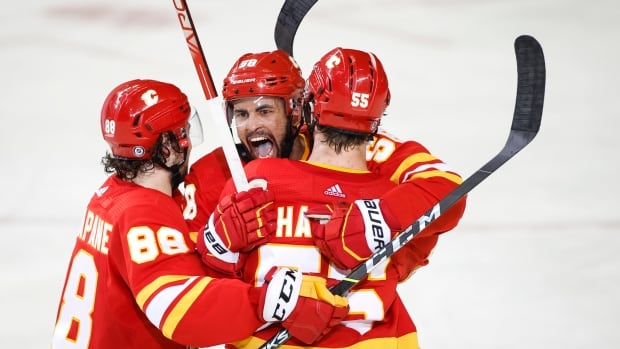 Led by Noah Hanifin’s goal and an assist, the Calgary Flames erupted for four goals in the second period on Thursday in a 5-2 win over the Toronto Maple Leafs, extending Calgary’s winning streak to five games.

Andrew Mangiapane, Oliver Kylington, Elias Lindholm and Rasmus Andersson also scored for Calgary (25-13-6). The Flames have also started to heat up on home ice having won five consecutive games at the Scotiabank Saddledome and outscoring the opposition 24-4.

Calgary, which has played the fewest home games in the league, has five games remaining on a seven-game homestand that will continue on Saturday night when the New York Islanders are in town.

Rasmus Sandin and Michael Bunting scored for Toronto (30-11-3), which had its six-game winning streak snapped. The Leafs were kicking off a three-game road trip that sees them next play in Vancouver on Saturday.

Mitch Marner had his eight-game goal and point-streak snapped. He had piled up 19 points over that span (10 goals, nine assists).

Jacob Markstrom made his 11th straight start for Calgary and coming off a 6-0 shutout over Vegas on Wednesday, he was excellent once again making 46 stops to improve to 19-10-5.

One of Markstrom’s 18 stops in a scoreless first period was a superb pad stop off Marner after he was set up neatly at the top of the crease on a centering pass from Morgan Rielly.

Jack Campbell, making his first start since Feb. 1, was credited with 21 stops. His record falls to 21-7-3.

Toronto opened the scoring at 3:49 of the second period when the Flames got caught scrambling around in their own end and eventually Sandin fired a puck past Markstrom.

But the lead was short lived as Mangiapane took a no-look backhand pass from Mikael Backlund and fired a shot past Campbell to tie it 24 seconds later.

Calgary eventually blew the game open with three goals in a span of less than three minutes.

At 13:03, Andersson jumped up into the rush and sent a pass across the top of the crease that was steered in by Hanifin, his defence partner.

Thirty-two seconds later, it was Hanifin’s turn to be the playmaker. With William Nylander in the penalty box for interference, Backlund won the ensuing face-off back to Hanifin, who sent a pass over to Kylington and his 40-foot slapshot found the back of the net.

At 15:54 with the half-capacity Saddledome still buzzing, Calgary made it 4-1 with Lindholm picking the corner after receiving a drop pass from Johnny Gaudreau.

The third period started just as the second left off with Andersson becoming the third Flames defenceman to score, sending a 55-foot wrist shot past Campbell to make it a four-goal lead.

The Leafs went with only 11 forwards due to Wayne Simmonds back in Toronto for personal reasons. Toronto then went down to 10 forwards when Ondrej Kase was levelled by a heavy open-ice hit from 6-foot-6 defenceman Nikita Zadorov who caught him with a shoulder, sending Kase and his helmet flying.

He remained down briefly before leaving the ice on his own, but he went straight to the Leafs dressing room and did not return.