If you hadn’t already seen him, count yourself among the lucky ones. This week, the world met Gritty — then shook with fear and loathing.

Gritty is the Philadelphia Flyers’ massive, hairy, bug-eyed new mascot. In his debut at the team’s pre-season hockey game Monday night, Gritty — a hockey mascot — fell on the ice and shot a person with a T-shirt gun.

Headlines reported his arrival on the ice like horsemen heralding the apocalypse. Crossing Broad warned: “The Flyers’ New Mascot Is Here To Murder You.” And a parody GoFundMe page called for Gritty to be euthanized.

Maybe that one was overkill.

“I think it’s a perfect representation of not only how we view ourselves, but how people view us as Philadelphia fans,” Matz said.

“He looks like some drugged up maniac, the way people perceive Flyers fans [as] the most intimidating fans in hockey.”

A common point Gritty critics have made is that his unhinged appearance makes him terrifying to children — the very people mascots are ostensibly supposed to please. Matz agrees.

“If I were a kid and Gritty walked up to me, I’d like to believe I’d be all about it, give him a high five and want to be Gritty’s best friend. But I would probably be afraid,” he said.

Hinkle maintains Gritty is not that scary.

“People seem to be really on board with the idea of a mascot that’s goofy enough for kids to enjoy and snarky and weird enough for adults to enjoy,” she said

Some Gritty haters have asked why the Flyers even need a mascot. Others accused Gritty of ripping off the style of the Phillie Phanatic, the monstrous green mascot who cheers on the Philadelphia Phillies baseball team. 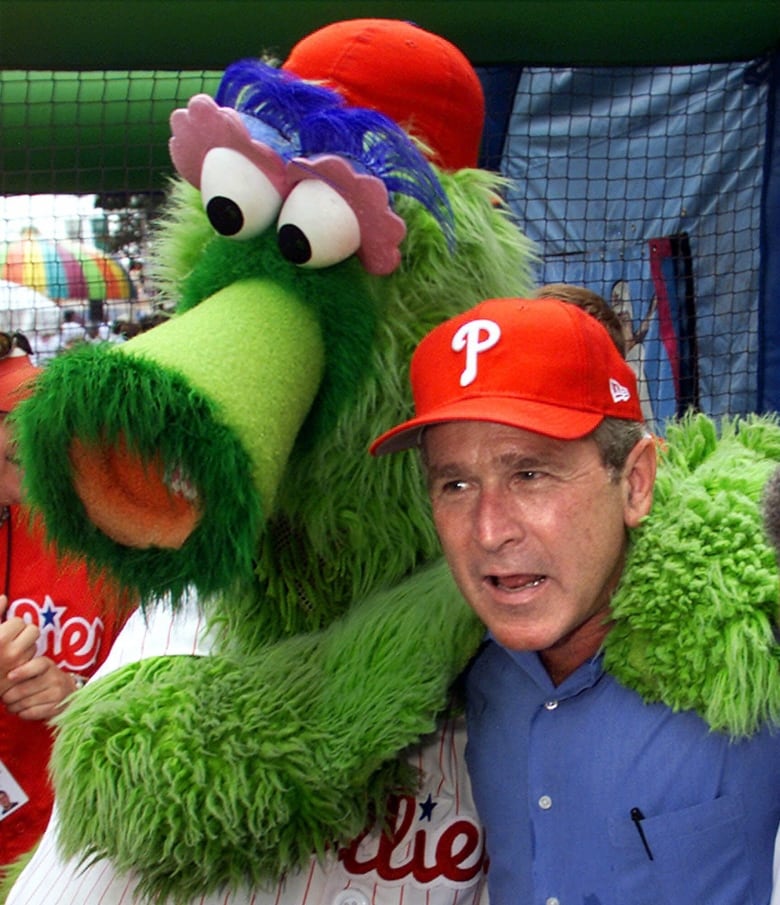 President George W. Bush, poses with baseball mascot, the “Philly Phanatic.” We may never know what the Phanatic whispered to him. (AP Photo/J. Scott Applewhite)

Hinkle and Matz say the comparison to the Phanatic was inevitable.

“The Phanatic just kind of represents Philadelphia and he’s what we compare every other mascot to. So you’re just not going to get a good reaction right away because everyone’s just going to say: ‘It’s not the Phanatic,'” Matz said.

Yet Hinkle and Matz both say introducing Gritty was a good move for the Flyers.

“I think they knocked it out of the park and you can see by the by the publicity it’s getting. I can’t remember the last time hockey was everywhere,” Matz said.

To hear more of Bill Matz and Kelly Hinkle’s gritty take on Gritty’s grit, download our podcast or click listen above.