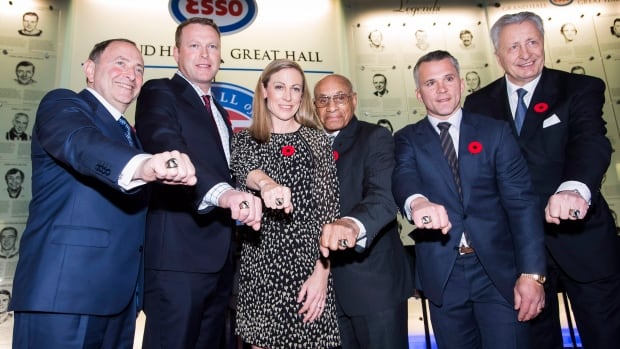 Each episode, host Rob Pizzo is joined by colourful characters within hockey to discuss great moments and great players and talk about today’s stars. The Hockey Night podcast brings you beyond the boxscore with insight you won’t find anywhere else.

The journey to the Hockey Hall of Fame is often long and winding.

This week, new inductee Jayna Hefford joins Rob to divulge some crazy stories from her 18-year career in which she won four Olympic gold medals with Team Canada.

When it came time for her induction ceremony, did all the memories come flooding back to her? What was it like giving a speech in front of and beside a smattering of hockey legends?

Hefford also offers her two cents on who might be next — including fellow Canadian hockey icon Hayley Wickenheiser, and NHLers Alex Mogilny and Daniel Alfredsson.

Then, in this week’s segment of Ice Level, Sophia chats with hall of fame selection committee member Brian Burke to get more on how the voting process works. He also talks about how Gary Bettman is the most important person in the game — more so than The Great One.

Watch as Brian Burke talks about Gary Bettman’s importance to the game:

In this week’s edition, the former GM talks about his work on the HHOF selection committee. 0:40