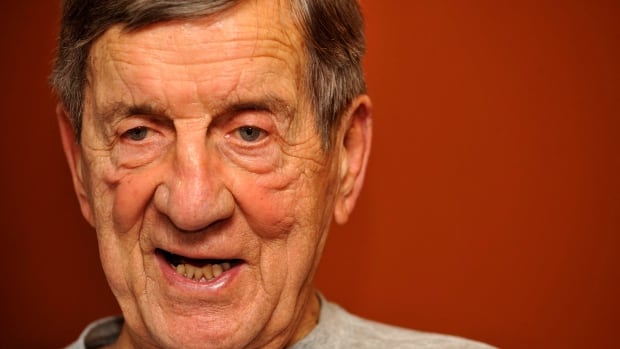 The hockey world lost a legend on March 4 when the great Ted Lindsay passed away at the age of 93.

Lindsay was one of the most talented, yet feared, players on the ice and garnered the nickname “Terrible Ted”.

He was part of the famed “Production Line”, which featured Red Wing greats Gordie Howe and Sid Abel. He won the Art Ross trophy in 1950 and won four Stanley Cups with Detroit.

Despite all the accolades, his greatest achievement was something he did off the ice. He was the driving force behind the creation of the National Hockey League Players’ Association.

NHL players – past and present – owe a debt of gratitude to Lindsay for the battles he endured getting the NHLPA off the ground.

On this week’s episode of the Hockey Night In Canada podcast, we celebrate the life and legacy of Ted Lindsay.

This week’s episode focuses on the life and career of “Terrible Ted” Lindsay. 1:14

Dave Stubbs has been a sports columnist for more than 40 years. He’s spent many of those years at the Montreal Gazette covering the Canadiens. Stubbs had the good fortune of getting to know Lindsay in his final years and joins host Rob Pizzo to give insight on who Ted Lindsay was and share some fascinating stories.

Ken Daniels has been the voice of the Detroit Red Wings since 1997. He’s had the pleasure of knowing Ted Lindsay for more than 20 years. Ken fills us in on what Lindsay meant to the city of Detroit, the Red Wings franchise and how he resonated with the fans.

And on Ice Level, Sophia Jurksztowicz catches up with Mathieu Schneider, special assistant to the executive director of the NHLPA. As a former player, Schneider hasn’t forgotten the personal sacrifices Ted went through so future players could have a prosperous life.

In each episode, host Rob Pizzo is joined by colourful characters within hockey to discuss great moments and great players and talk about today’s stars. The Hockey Night podcast brings you beyond the boxscore with insight you won’t find anywhere else.