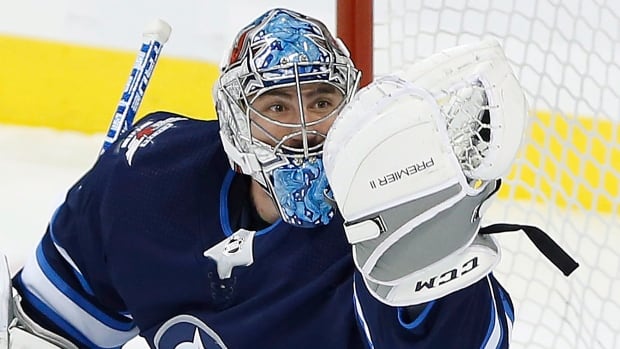 Goalie gear is front and centre on this week’s episode of the Hockey Night in Canada podcast.

In terms of technique and equipment, there isn’t a position in sports that has transformed more dramatically than the NHL goaltender. Setting aside how goalies’ playing style has changed in recent years, we’re focusing on the equipment, which has been a hot-button topic from the opening game of this season.

We’ve seen a plethora of goals already this fall. And fans are loving it. The goalies? Not so much.

Over the last few years the league has tried to get goalie equipment under control. Pads and pants have gotten smaller. This year, it’s chest protectors that have seen a reduction in size, specifically in the shoulder area.

The league is trying to make sure that netminders don’t have unfair advantages because of the gear they wear. Everyone wants to see goalies making saves based on ability rather than equipment size.

In this week’s edition, the Flyers goaltender talks about the new goalie equipment guidelines and how safety has become an issue. 0:51

In short, the NHL wants equipment to fit like a well-tailored Henrik Lundqvist suit.

But goalies don’t seem too happy about the shrinking gear. The Jets’ Connor Hellebuyck says the league “is trying to make goalies worse” while Flyers netminder Brian Elliott complained about his bruises on this week’s podcast.

We also hear from some retired goalies. Kelly Hrudey’s career began in the era of sodden old brown leather pads and ended in San Jose with painted lightweight modern pads. Corey Hirsch, who has been pushing for smaller goalie equipment for a while now, joins the conversation with some growing concerns from goalies around the league.

Be sure to subscribe to get a new Hockey Night in Canada podcast every week. The show is available on iTunes, Google Podcasts, Stitcher, Tune In or wherever you get your podcasts.