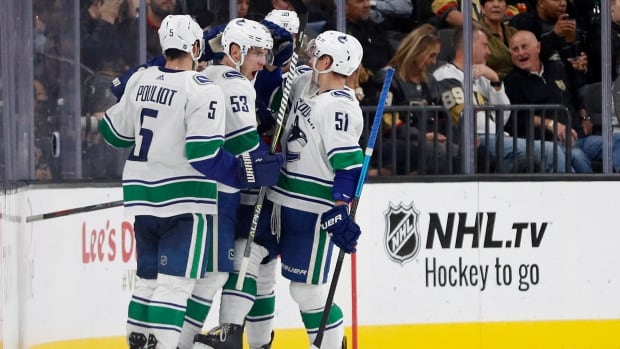 Markus Granlund scored in the shootout and the Vancouver Canucks earned a 3-2 victory over the Vegas Golden Knights on Wednesday night.

Canucks goalie Jacob Markstrom stopped all four shots he face in the shootout, and made 33 saves.

Jonathan Marchessault had a chance for a breakaway with a little more than two minutes left in overtime, but was thwarted by Horvat, whose backcheck knocked the puck away.

Marchessault, Pacioretty, Erik Haula and William Karlsson all missed their opportunities in the shootout.

The Canucks, who played their seventh road game in their last nine contests, are 2-0 in overtime games and now 1-0 in shootouts. The Golden Knights, who won a shootout in Minnesota in their second game of the season, are 1-1 in shootouts.

While the Golden Knights extended their penalty kill streak to 13 over their last five games, they continued to struggle with their power play, going 0 for 4. They’re a league worst 2 for 28 this season with a man advantage.

Vegas opened the scoring when Erik Haula stripped the puck from Derrick Pouliot behind the net and fed Pacioretty in front of Markstrom. It was Pacioretty’s second goal of the season, and first at home since joining the Golden Knights.

Vancouver tied the game when Loui Eriksson fired a dribbler from the point and Horvat redirected it past Fleury, just inside the post.

Horvat’s second goal made it 2-1 a minute later. He raced down the left side and unleashed a wicked wrist shot over Fleury’s glove.

Reaves tied the game late in the second period with his second goal of the season.