When 17-year-old Jett Woo was selected by the Vancouver Canucks in the second round of the 2018 NHL Draft on Saturday, becoming the second-highest pick of Chinese descent, he was unaware that he was making history.

“I didn’t really understand it until people were telling me — and so to have so much support in that way, and have my heritage with me in this process, is something that’s really cool to me,” he said.

“[Growing up], I was so involved in my heritage. To my family it’s really something really special.”\

Woo’s drafting comes at a time when increasing numbers of players of Chinese descent are entering hockey’s highest ranks, and China is putting special emphasis on winter sports in preparation for the 2022 Olympics in Beijing.

Hockey players and analysts alike also say that, in a city like Vancouver, a player like Woo could inspire a generation of young players. 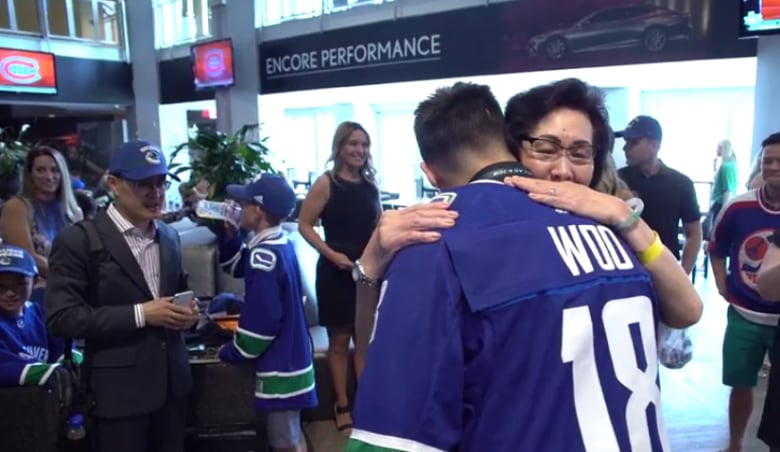 Woo embraces his family members after the 2018 NHL Draft on Saturday. (Canucks TV)

Woo’s paternal grandparents were born in Canton, China, and after moving to Canada they owned a small restaurant chain called Marigolds in Winnipeg, where Woo grew up.

In a press conference on Saturday, Woo — currently a right-shot defenceman with Moose Jaw in the Western Hockey League — said he was sometimes picked on because of his heritage, but that he tried to use it to his advantage.

Hosea Cheung, communications manager for China National Ice Hockey Team, said that experience will resonate with kids dreaming of one day being on the ice.

“I think a lot of people understand that adversity or that challenge that he had to overcome to get to where he is today, so there’s just an extra boost of wanting him to do well and succeed,” Cheung said.

“And on another hand, it’s just cool. It’s just nice to have a kid who has [that] background, potentially being able to play for the Canucks.”

I love the Jett Woo pick. I love that Chinese kids in Vancouver are gonna grow up watching the Canucks with someone on the team who looks like them

Cheung said that Woo, who is six feet tall and weighs 205 pounds, could help shatter preconceived notions about Asian athletes.

“What Jett Woo brings is a hard-hitting, more physical game, and I think that hopefully might change the stereotype that goes toward players of Chinese or Asian descent.”

The highest-drafted player of Chinese descent is Joshua Ho-Sang, chosen in the first round by the New York Islanders in the 2014 NHL Draft.

Zachary Yuen, who grew up in Vancouver and was drafted in the fourth round in 2011, now plays for KRS Heilongjiang, an affiliate of Kunlun Red Star of Russia’s Kontinental Hockey League.

He said that even a few years ago, he was one of the only players at the triple-A level who was of Chinese heritage.

“When I was growing up, I didn’t have a Chinese player who was my idol because there just weren’t any back then,” he said.

“So I think for now, for the next generation of Chinese kids to see someone with a Chinese last name and a Chinese face is really important,” he said.

“I know if I was younger if I saw someone playing in the NHL who looked Chinese, that would definitely be my favourite player. It’s definitely a big step.”

‘Looking for a trailblazer’

Yuen said there are currently plans to build 500 rinks in China before the 2022 Olympics.

“It’s definitely a sport that’s coming and emerging in China. In Beijing, we get 8,000 fans and it’s broadcast nationally.”

Cheung said he hopes that as professional hockey becomes more diverse, draft picks like Woo will no longer be exceptions. But for now, it remains a big story.

“I think it will be less and less of a talking point over the years when more and more players of Chinese descent make it into the NHL,” he said.

“But right now, people are looking for a trailblazer.”

A few of my friends in Hong Kong who follow the NHL are waking up now (time zone) and sending me texts that only say “Jett Woo”. So funny 😂