Tanner Pearson scored in the fourth round of the shootout and the Vancouver Canucks kept their faint playoff hopes alive Thursday night with a 3-2 win over the L.A. Kings.

Brock Boeser and Alex Edler scored in regulation for the Canucks (33-35-10), who are seven points behind Colorado for the second wild-card spot in the West with four games to play.

Quinn Hughes, selected seventh overall by Vancouver in 2018, earned an assist in his NHL debut.

Vancouver goalie Thatcher Demko made 37 saves in regulation and Jonathan Quick stopped 36-of-38 shots for L.A.

The win snapped a three-game losing skid for the Canucks.

Quinn Hughes assisted on a second period marker from Brock Boeser for his first point in the NHL. 0:29

L.A. opened the scoring 12:56 into the first period after Wagner poked the puck at Demko from the side of the net.

The goalie flattened out in his crease but couldn’t contain the rebound. Instead, it popped out to a waiting Wagner who chipped the puck up, off the crossbar and in.

Vancouver responded on the power play midway through the second frame after Kings right-winger Carl Grundstrom was called for interference.

Canucks rookie Elias Pettersson got the puck to Edler at the point and the veteran defenceman sniped a laser between Quick and the post.

The tally was the 94th of Edler’s career, making him the Canucks’ franchise leader for goals by a defenceman. The hometown crowd stood and cheered the 32-year-old blueliner as the feat was announced.

It was the Canucks’ newest defenceman who set up the club’s second goal of the night less than a minute later. 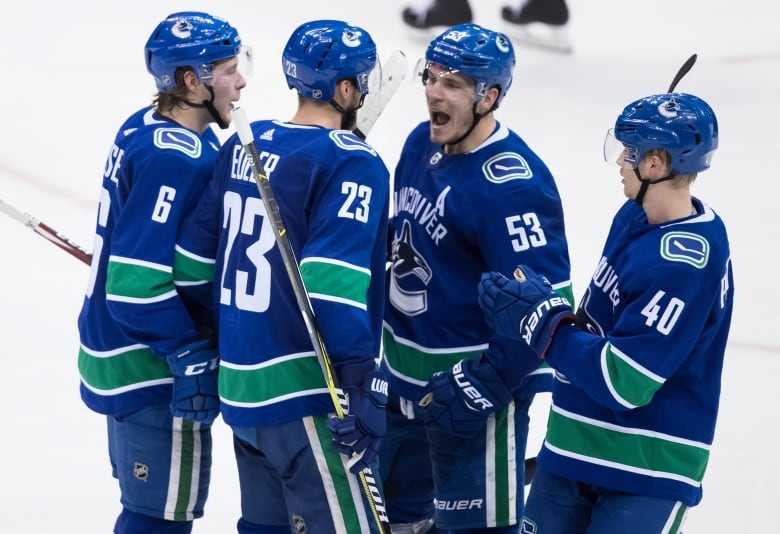 Hughes deked out Kings centre Tyler Lewis below the L.A. goal line, escaping his check and gaining time and space to get back out front and put a shot on net.

His attempt ricocheted off the post to Boeser, who fired a speedy wrist shot in past Quick top shelf.

Kempe tied the score up again 11:47 into the third period after Canucks left-winger Loui Eriksson turned the puck over in the defensive zone.

Lewis picked it up and sliced a cross-ice pass to Kempe at the hash marks and the Kings centre sent a wrist shot sailing past Demko.

The young Vancouver trio of Hughes, Boeser and Pettersson put on a show in overtime but the future faces of the franchise couldn’t bury the puck.

The Canucks will be back on action on Saturday, hosting the Dallas Stars.

The Chicago Blackhawks will visit the Kings the same night.